Play sound
Metallic_Monks.ogg
“-You may know me as the Head Chief First Researcher of Labs Z-9 and Z-14. There I fought valiantly to preserve rattlesnake DNA, and put it right where it belongs, in the husk of another feared predator.-”— Doctor Borous

The Z-9 Crotalus DNA preservation lab is a location in Big MT in 2281. It is situated northwest of the X-8 research center.

The lab is the home of many nightstalkers. Entering the main door into the lab, the player character can proceed in three directions. By traversing forward and then left, one can find four cells containing cages with egg clutches. Each cell contains a small amount of loot including food items, nightstalker eggs and blood. Another cell nearby off the main hallway contains a lobotomite mask on the head of a corpse.

Heading forward and right from the main entrance will take the player character into a lab area which is joined onto a caged observation area. In the lab section, there is some computing equipment and a few crates containing assorted loot as well as a sample crate containing night stalker eggs, blood samples, and nightstalker squeezin's. On the top shelf of one of the cabinets is a white bin containing a copy of Lad's Life. There are also two proton throwing axes, an electric hot plate, and a deluxe chemistry set.

In the caged area, two nightstalkers will spawn. The player character can open the gate and go into the small area which contains only a cabinet and a crate containing assorted loot, as well as some dog bowls lying on the floor of the area.

In the main lab area, the unique night stalker Shadis can be found, as well as the Auto-Doc Upgrade: Implant Y-3, located on one of the operating tables. On and around the tables are various medical instruments such as saw blades, bone saws, and tweezers. On the floor of the lab, there are a few egg clutches that contain nightstalker eggs. In the lab, one can find an electric hot plate and deluxe chemistry set.

Regarding the name of the facility, Crotalus is a genus of venomous pit vipers known as rattlesnakes. 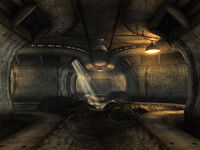 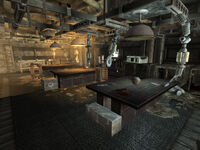 The room with Shadis