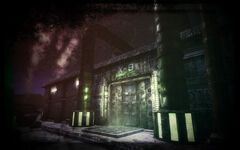 The X-8 research center, or the X-8 Bio-Mechanical Testing Facility,[1] is a location in Big MT in 2281. It is located to the far east of the Think Tank.

A research facility used for experimenting with biomechanical research, the X-8 research center's most recent project involved creating and testing cyberdogs. Dr. Borous became heavily involved in this project, even using his own pet dog Gabe as a test subject; Gabe was eventually turned into a cyberdog and sealed within an area of the facility. A sizable testing area was created within the research center, in the form of a pretend high school (ostensibly based on Borous' old high school American High) which the researchers claimed was for use in infiltration testing, but was actually to test the cyberdogs' ability to detect said infiltrators.[2] The K9000 cyberdog gun was also developed within X-8.

At some point, the facility received a shipment of night stalkers in place of standard dogs. When released, the creatures massacred the facility's shipping department, leaving Skippy as its only survivor and causing the area to be locked down.[3]