The development of the X-01 began shortly before the Great War.[1] It represented a radically new approach to designing powered armor, eschewing traditional design philosophies that defined the T series, and was a high-profile research project meant to supersede previous power armor models. However, although the suit was technically functional by late 2077, it was burdened with numerous issues that precluded widespread use in the field. While the first test models were issued to Presidential bodyguards, the X-01 was never deployed in larger numbers.[2] A single suit of X-01 MK V was given to the Nuka-Cola Corporation, as part of their Project Cobalt. While the suit served as a successful proof of concept of using a strontium-90 based plating over the armor, this improvement was not adopted into the armor's schematics before the onset of the Great War. Further development was halted, due to the outbreak of the Great War.[1][3] The schematics for an earlier version of the armor were saved by the Enclave just before the bombs fell, with the organization keeping copies in the archives of their Poseidon and Whitesprings facilities. This allowed the Enclave a limited production of the suits.[4]

The X-01 represents the top of the line protection against energy and radiation, making it perfect for one on one engagements with scorchbeasts. The one area where it lags is ballistic protection: Ultracite power armor and a top-level T-51 both offer higher protection against conventional threats.

When crafted, the X-01 will come in its unique prototype paint job (yellow) and can be repainted to the standard metal color at any time.

The Whitespring bunker: Military Wing Command Center Archive Terminal under Schematic Archives will grant a full set of blueprints for free after completing the Officer on Deck quest. Pieces must be crafted at a Power armor station. The player character must be at level 40 to craft level 40 & level 50 to craft level 50. 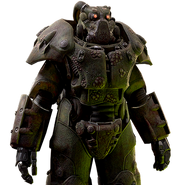 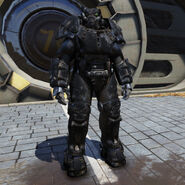 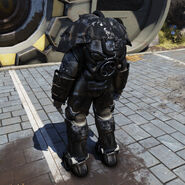