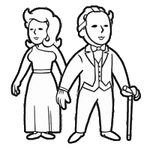 The White Glove Society is one of the Three Families responsible for the operation and maintenance of the casinos on the New Vegas Strip, specifically the Ultra-Luxe in 2281.

The Ultra-Luxe is an establishment of incredible refinement that delicately conceals its operators’ terrible past; a past which the tribe has been at pains to remove from public record or knowledge to the point of fanaticism. Run by the White Glove Society, the Ultra-Luxe pampers its clients and provides the Strip’s most elite casino experience. A dress code is strictly enforced. All of the staff and family members are well-dressed, well-spoken, and well-behaved. The casino’s prime attractions are its meat-oriented restaurant, The Gourmand, its cocktail lounge, Top Shelf, and its art gallery. Roulette and blackjack are the only games offered. But the real draw to the place are the steaks. Succulent and delicious, a variety of meat treats are available, but only to the most discerning (and sponsored) Society member.[1]

The White Glove Society is headed by Marjorie who also serves as manager of the casino's meat-oriented restaurant, The Gourmand. Mortimer serves as the hotel manager and works the front desk of the Ultra-Luxe. Mortimer's position in the casino also gives him the responsibility of finding suitable candidates within the hotel and casino to abduct, provided the White Glove Society are brought back to cannibalism. Philippe is The Gourmand's chef, and creator of the Ultra-Luxe's famous steaks.

Some of the White Gloves now wish to return to cannibalism by abducting healthy, well-fed casino patrons, specifically Heck Gunderson's son Ted Gunderson, whose abduction starts the quest Beyond the Beef. If the Courier sided with the Legion, they can recruit the White Glove Society to fight with them in the final battle by speaking to Marjorie, but they offer no support at Hoover Dam.

During the development of Fallout: New Vegas, the White Glove Society was originally named the Sawneys.[2]

Upon finishing Beyond the Beef, Mortimer may have no more commentary. However, a quest note will repeatedly pop up saying to speak to Mortimer for more info on the White Glove Society, which cannot be accomplished, unless he is resurrected and then talked to via console.[verification overdue]