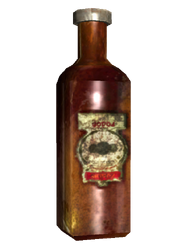 Vodka is an alcoholic beverage in Fallout: New Vegas.

Vodka, as well as other hard liquor, provides a boost of +1 to Strength and Charisma but also gives a penalty of -1 to Intelligence. It has a higher chance of becoming addicted, compared to similar drugs.