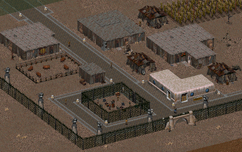 The Vault City courtyard area is the first district of Vault City an Outsider enters and hardly an indicator of the splendor of the main city.

Outsiders (non-Vault citizens) live here. Beside the houses and the prison, there is also Happy Harry's store, the Spitoon and the "hospital".

John Cassidy (a possible companion) and his bar can be found here.

The Smiths need some tools for their crops. One of them is a plow which Happy Harry has, though he requires a lot of money for it.

Joshua, a citizen of the courtyard was arrested by the city guard. Amanda, his wife is looking for someone to get into the city and get Joshua out.

Mr. Nixon, Curtis's doll has gone missing. The Chosen One can locate the doll for Chris and give it to him... maybe even destroyed.

Charlie, the citizen of courtyard seems to be ill. Someone with medicine skills can discover what is with him... and cure him.

The Vault City courtyard appears in Fallout 2 only.