The team laid down some simple rules:[4]

Rule #1: Multiple Decisions. We will always allow for multiple solutions to any obstacle.
Rule #2: No Useless Skills. The skills we allow you to take will have meaning in the game.
Rule #3: Dark humor was good. Slap-stick was not.
Rule #4: Let the player play how he wants to play.
Rule #5: Your actions have repercussions. 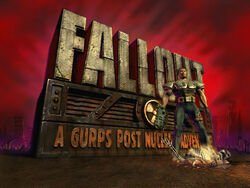 To this day, the precise reasons behind Interplay and Steve Jackson parting ways remain unclear. Feargus Urquhart in a response to PC Gamer claimed that the reason the license was dropped was to avoid red tape and legal wrangling over the game's content, including Vault Boy, the violent introduction, and a small character scale.[7] Similarly, Scott Campbell claimed in The Origins of Fallout that Steve Jackson Games was satisfied with everything but the Vault Boy pictures in the character screen and the execution scene in the introduction - but also stated that the game would likely have to be remade in order to retain the license.[8]

However, Sean Punch, GURPS Line Editor at Steve Jackson Games, remarked in an interview with RPG Codex that he is "skeptical of claims that a single cut scene, loading screen, dialog line, etc. caused the parting of ways".​ He has also stated that the issue that was cited as a reason for the abandoning of the license was "that the license didn't word the approval process in a way that was good for either party" and that it was ultimately easier to remake the RPG elements than rewrite the licensing agreement with all the legal wrangling involved.[9] Urquhart did mention the vague approval process, which was a simple statement that Steve Jackson Games "had control over the environment in which the license would be used", in the aforementioned PC Gamer interview, supporting this notion.[7]

Regardless of the reason, Interplay claimed in an official statement that this was a mutually agreed decision, Steve Jackson, in a February 12, 1997, statement released through The Daily Illuminator on the Steve Jackson Games website stated that he wished he knew why Interplay decided to drop the license, and that no official correspondence to that effect was received by that date. It was a surprise to the Fallout development team as well.[10] In a subsequent meeting with Tim Cain, he made a lot of concessions to save the project and the implementation of GURPS created by the development team. However, the decision was handled by the executives of Interplay and Cain or the Fallout developers had no vote in the matter.[11] On March 14, 1997, Steve Jackson received a phone call confirming that GURPS was being dropped, as the development team was told to remove all licensed content and was too far along creating a replacement (SPECIAL) and redoing art assets for them to return to GURPS. The caller laughed when Jackson asked to receive a confirmation in writing, saying that he would "see" if he could send a formal letter confirming this. The unilateral dropping of GURPS after three years of cooperation soured Jackson's relations with Interplay.[12]

GURPS sometimes appears as a terminal password in Fallout games since Fallout 3 onward.

As Fallout is identical to the GURPS game in all but the character system, this section focuses on the implementation of the GURPS system. GURPS is an acronym for Generic Universal Role Playing System and is a table-top role playing game system published by Steve Jackson Games. Originally released in 1986, it is currently in its fourth edition. GURPS is designed to be easily applicable to any role playing game setting, and is played with three six-sided dice. It uses a point-based character creation system, and represents characters using four basic stats (Strength, Dexterity, IQ, and Health) along with advantages, disadvantages, perks, quirks, and skills.[13]

Unlike SPECIAL, GURPS has a lot of skills the player can acquire. Based on the number of assets, the player would have been able to select a total of 56 skills. This was cut down to just 19, a little over a third of what the GURPS version featured.

SkillDex categories (twelve, corresponding to the twelve buttons on the lower bar) 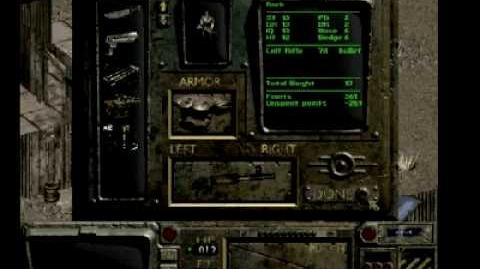