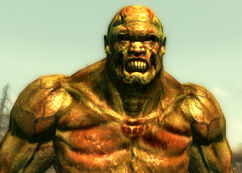 Uncle Leo is a friendly, wandering Vault 87 super mutant that the Lone Wanderer may meet in The Super Mutant Philosopher random encounter in 2277.

Uncle Leo is a super mutant pacifist, who is embracing a spirit of giving and grace. He recalls his adventures to anyone who will listen. Uncle Leo gladly gives gifts to those in need, and reveals many facts about the genesis of super mutants (that they are not "born" but "created," for example).

Uncle Leo was exiled from his super mutant brethren because he was exhibiting peace-like attributes. They could not tolerate his message of peace and so they cast him out. Uncle Leo has roamed the Capital Wasteland ever since. If asked about his name, Uncle Leo will reply he has "always called himself that. Maybe it being his name before he became a mutant, or read it in a book a long time ago."

When the Lone Wanderer first speaks to Uncle Leo, he will express surprise that they have not shot at him yet. When a dialogue option appears to tell him to give up his goods (essentially "robbing" him), he gladly imparts a suit of dirty pre-War businesswear to the Wanderer as a gift, wishing he could give more.

Asking him what he meant when he said "before I became this" makes him reveal that super mutants are not born but are made by other super mutants in "a cold, dark, metal place." He mentions that they use the captives that they abducted to make more of themselves, but he either does not know or cannot explain how this is done.

Uncle Leo can be encountered a second and third time. He will tell the Lone Wanderer that after their first encounter with him he fell into a dark cave while climbing a hill and hurt his leg. The cave turned out to be an old basement in which there were stacks of purified water. He tells them that after he got out of the basement he has been hunted by a group of "bleeders" (as super mutants refer to humans) and that he was forced to abandon the water he was carrying. As with the first encounter, he will offer the Lone Wanderer another suit of dirty pre-War businesswear. At the third meeting, the Wanderer can express their concern for Uncle Leo, believing the Wasteland to be too dangerous for him; given his previous run-in with humans. He will explain that if he allowed his own worries to get the better of him, he would never take another step.