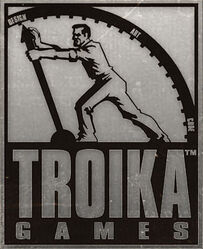 Troika Games was founded in October 1998 by three former Interplay employees: Tim Cain, Leon Boyarsky and Jason Anderson. The three were an integral part of the development of Fallout, but left shortly after beginning work on Fallout 2 to form their own company. Troika's prime ambition was to work on high quality in-depth cRPGs. Troika had sought to purchase rights for Fallout, but were outbid by Bethesda.

Troika closed down its doors on 24 February 2005. It seems that Troika had trouble securing publishing deals.

Troika employees scattered into various computer game companies. Jason Anderson returned to the revived Interplay studio to work on Project V13, a Fallout-themed MMORPG, before moving on to Brian Fargo's InXile Entertainment -- which currently holds the rights to the Wasteland title—in March 2009. Leonard Boyarsky worked on Diablo 3 at Blizzard Entertainment, while Tim Cain is currently working at Obsidian Entertainment as a senior programmer.