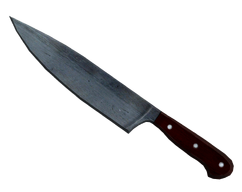 The toy knife is a unique knife found in the swamps of Point Lookout in the Fallout 3 add-on of the same name.

The toy knife is visually identical to the kitchen knife, but is apparently only a toy version, possessing the lowest damage and durability of any weapon in the game. In addition, it cannot be used to repair other weapons or repaired without the help of a merchant, making it impractical for anything other than serving as a collector's item.

The toy knife can successfully strike about 200 times from full condition before breaking.

The toy knife can be found directly south of Turtledove Detention Camp, close to a yellow sign that is near the road (which is visible on the world map). With ones back to the sign, turn until one sees a relatively long and impassible line made of bushes to the west / northwest. It is hidden behind it, sitting on a wooden crate with a hockey mask.

As the knife is found with a hockey mask, it is most likely a nod to the Friday the 13th films, which all feature a serial killer who uses a machete and wears a hockey mask.

Sometimes, the toy knife, the hockey mask and even the box disappear. To fix it, reload a save from before going to Point Lookout. [已核实]