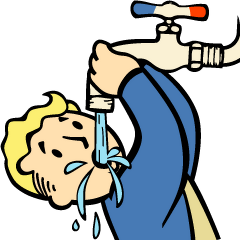 Complete The Waters of Life
20

“I am Doctor Madison Li. I have people with me in need of shelter. You must allow us access at once.”— Doctor Li trying to enter the Citadel after evacuating Project Purity.

The Waters of Life is the eighth main quest in Fallout 3. It is also an Xbox 360/PC achievement and a PlayStation 3 Trophy.

James will make his way to Rivet City; the Lone Wanderer can choose to follow him there or leave him on his own, either way, he will eventually reach the Rivet City science lab and wait for the player character to meet him there.

Upon the player character's arrival, James convinces Dr. Li to reactivate Project Purity. After a short conversation, he asks the player character to meet him and the scientists at the Jefferson Memorial. It is highly advised to stock up and prepare for a battle, as well as free up as much inventory space as possible.

Named characters who relocate to the Jefferson Memorial:

Dr. Li, James, and the rest of the science team will be waiting for the player character at the entrance to the Gift Shop. James informs the player character that they must clear the Memorial of the remaining super mutant threat before they can proceed. The Memorial Sub-basement consists of short narrow corridors with an occasional room.

If the player character has already cleared out the Jefferson Memorial, James and the team will go straight to the Rotunda, bypassing the preliminary pep-talk.

Once James arrives at the control room, he asks the player character to carry out some maintenance tasks to bring the project back online.

The entrance to the pipes is directly ahead from the entrance to the Gift Shop. Once inside, the player character must run through the pipe to the end and turn the control. On the right is the valve to activate the draining. At this point. As soon as the valve is activated, the player character will witness the arrival of Enclave soldiers in a Vertibird. (If from inside the pipes one successfully attacks one or more of the arriving Enclave soldiers then upon the next section of pipe they may be waiting at the end of the tunnel.) The opposite gate unlocks, and the player character is allowed through to the next area.

Return to the Control Room

Now the player character must battle their way back to the Rotunda, killing any power-armored Enclave soldiers in the way.

Upon arriving at the control room, Dr. Li is locked out of the main area, while Janice Kaplinski, James, Colonel Autumn and two Enclave soldiers are locked in. Colonel Autumn confronts James and orders him to forfeit the Memorial and assist the Enclave with making the water purifier operational. James refuses, stating that the Enclave has no authority over such a private project, and asks the Colonel to leave. Autumn eventually kills Janice Kaplinski, prompting James to accede to the Colonel's demands to avoid more violence.

“Autumn: By the authority of the President, this facility is now under United States government control. The person in charge is to step forward immediately, and turn over all materials related to this project.

James: That's quite impossible. This is a private project; the Enclave has no authority here. I'm going to have to ask you to leave at once.

Autumn: Am I to assume, sir, that you are in charge?

Autumn: Then I repeat, sir, that you are hereby instructed to immediately hand over all materials related to the purifier.

Autumn: Furthermore, you are to assist Enclave scientists in assuming control of the administration and operation of this facility at once.

James: Colonel... Is it Colonel? I'm sorry, but the facility is not operational. It never has been. I'm afraid you're wasting your time here.

Autumn: Sir, this is the last time I am going to repeat myself. Stand down at once, and turn over control of this facility.

James: Colonel, I assure you that this facility will not function. We have never been able to successfully replicate test results...

Autumn: I suggest you comply immediately, sir, in order to prevent any more incidents. Are we clear?

James: Yes, Colonel. I'll do whatever you want; there's no need for more violence.

Autumn: Then you will immediately hand over all materials related to this project, and aid us in making it operational at once.

James: Very well. Give me a few moments to bring the system online.”

James instead overloads the purifier, flooding the locked chamber with deadly levels of radiation. Col. Autumn quickly injects himself with a mysterious solution (most likely Rad-X) and keels over, unconscious. James drags himself over to the emergency bulkhead and tells the player character to run, before slumping to the ground, dead.

Escort Doctor Li to the Citadel

The tunnels are populated with Enclave troops and multiple variants of feral ghouls. The first area with catwalks houses a table with various Chinese items: most notably a Chinese Army: Special Ops Training Manual, a Chinese assault rifle, a dirty Chinese jumpsuit, and a rare Chinese commando hat. Also past the table is another table with a rolling pin like the one found in Tranquility Lane.

Once in the second section of the tunnels (called Taft Tunnel), Garza can be heard saying, "Dr. Li, my heart... I must rest." then Dr. Li will explain that they need to stop: Garza's heart disease has gone critical, and he will not make it to the Citadel alive if first aid is not administered quickly. The player character has a few options at this point:

If the player character does not want to leave or kill Garza but does not have the stimpaks nor Buffout, they need to find stimpaks elsewhere and bring them back to Garza. They are in two locations: the first is an abandoned operating theater which is to the left when the corridor forks off not long after Garza has to stop; the second location is at the very end of the corridors, directly behind the Brotherhood of Steel barricade, in a first-aid container.

Alternatively, the player character can simply fight their way through the tunnel, leave it, and go find the supplies somewhere else (buying them from a doctor would be the simplest way). Then, head back to the Citadel, enter the tunnel, and head back to the area where the scientists are. They should still be there, and one should still be able to give Doctor Li the medical supplies and complete the quest as normal.

If Garza is already dead before The Waters of Life is started, this part of the quest will be skipped entirely.

After dealing with the Garza situation, the player character can continue the same routine of checking for danger, telling the scientists to wait, then returning to the them once their path is secure. Eventually, the player character must enter a room with a catwalk above the entrance. This can be a tricky battle since the Enclave troops have high ground, complicated by the fact that non-player characters have a tendency to run inside the room and stand in the center (especially followers like Charon).

Although soldiers on the upper levels are not normally accessible, it is possible to reach their location by using the steps, jumping onto the railing, then running along the wall to reach them. This also allows for looting their power armor (Enclave Hellfire armor with Broken Steel active or Tesla armor). In the housed area to the back of the room is a desk with an eyebot helmet.

Farther down the passage, the opposition will turn into feral ghouls. Eventually, the terrain will become a sewer tunnel with a Brotherhood of Steel checkpoint at the end. The soldier is not too happy to see civilians running through his checkpoint. Once past the sandbags, it is advised to keep running until the rest of the science team is well away from the sandbags, as a horde of feral ghouls will pour from a near door. The Brotherhood of Steel is armed with a flamer for this exact reason and will pour flame into his attackers while two overhead turrets help out. At the start of this tunnel on a bench is a Nuka-Cola Quantum and a copy of Nikola Tesla and You on a picnic table behind a generator. If the Brotherhood of Steel trooper is killed, one of the scientists will likely then pick up the flamer and attack the feral ghouls.

Once topside, an exasperated Dr. Li will argue with Paladin Bael for entrance into the Citadel to no avail. She then runs to the intercom and yells at Owyn Lyons to open the "goddamn" door at once. The door then immediately opens.

Once inside, Owyn Lyons will confront Dr. Li and the surviving science team. Lyons questions Li for a few minutes on what transpired at the Memorial, and Li breathlessly tells him about James's plan and the Enclave's intervention.