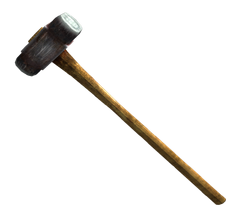 The Tenderizer is a unique sledgehammer found in Fallout 3.

Given its name, ability, and location (a mirelurk butchery), it is likely this weapon was originally used for literally tenderizing mirelurks.

The Tenderizer can successfully strike about 500 times from full condition before breaking.

It's located inside the Anchorage Memorial, in the utility room with the broken door. To find the door, enter the Memorial Service Entrance on the east side of the memorial. At the junction, turn left and it's the second door on your right. The door can be fixed by finding the door component, but note that you need a Lockpick or Science level of 50 to be able to open the safe in which the door component is stored in the top level of the building. (You can look behind the Nuka-Cola dispenser to obtain the pass code for the computer in the same room, which will then allow you to unlock the safe.) A Repair skill of 35 or higher is required to fix the door with the help of the component. Without the component a repair skill of 95 is required.