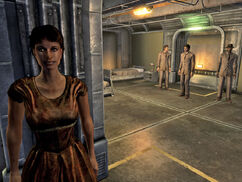 “The Omertas, who run Gomorrah, have become suspicious of Martina's frequent visits to their casino. Soon they'll pay her a visit of their own.”— Vulpes Inculta

The Finger of Suspicion is a side quest in Fallout: New Vegas.

The quest is pretty straightforward. While in the Legion's Fort, talk to Vulpes Inculta in Caesar's tent. He'll brief the player about an informant girl (Martina Groesbeck) who is either sided with the Legion or a friend of it, and is about to be hunted down by the Omertas. Travel to the Strip and walk through the two gates to get to Vault 21 casino/hotel, go then to the lower levels and follow the marker around; you'll eventually arrive at a room where three Omerta thugs are about to kill the woman. Now, there are various options available.

You can attack the thugs by surprise without saying a word, or talk to one of them. At this point, it's possible to convince them that Martina is working for the Legion, scaring them enough to leave without a fight, but only with a high enough Speech skill (50 Speech). If you don't have enough Speech skill (or you just want to kill them), there's also a dialogue option that triggers a fight. One of the thugs carries a knife (and will attack in close combat), the others are equipped with a sawed-off shotgun and a 9mm SMG, respectively. None of them wear any kind of armor (only suits), so it shouldn't be a difficult encounter. You can also use the Speech option, and kill them quickly while they walk away. This will give you the challenge, the Speech xp, and the kill xp plus loot. No one except the thugs turn hostile if you attack them. Also, if you have finished How Little We Know and killed the bosses, another non-violent option appears where you can tell them you know the boss, and they will leave quietly. Solving the quest peacefully gives you an exceptional quest performance from Vulpes Inculta.

After you have dispatched them (either way), talk to the girl. She'll thank you and will answer a few questions about what she does at The Strip, stating she's working for the NCR, and assuring that she has nothing to do with the Legion. Once you're done talking, return to the Fort in order to collect your experience reward. Vulpes will explain that Martina actually works for a Legion's frumentarius infiltrated within the ranks of the NCR, and immediately begins the quest I Put a Spell on You on the Legion side.

"The Finger of Suspicion (Points at You)" is a popular song written by Paul Mann and Al Lewis, and published in 1954.