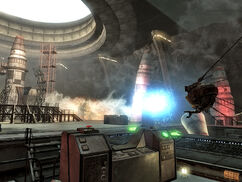 The End is a main quest in the Fallout: New Vegas add-on Lonesome Road.

To complete this quest, the Courier must proceed to the Control Panel from which the missiles may be launched. Should the courier desire to select "Attempt to cancel the launch.", ED-E must be rescued first. If not, the quest fails and leads to The Apocalypse.

In order to rescue ED-E, the courier must free him from his pod in the repair room near the elevator to the temple. ED-E is located in pod number 2 and can be released by using the terminal on the table in front of the pods.

Once ED-E has been rescued and the Courier has dealt with Ulysses, proceed to the launch control pad and select the option for ED-E to hack it. This will initiate a recording from Dr. Whitley. The following dialogue will explain that the eyebots can override heavily encrypted data, but will probably not survive the process.

Since selecting this option prevents another apocalypse, the player character's reputation with both the Followers of the Apocalypse and the Brotherhood of Steel will increase.