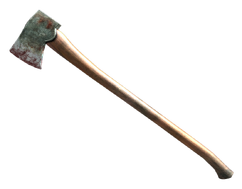 “This axe was, er, 'misplaced' by one of my other patrons. She won't be needing it anymore, and it's a weapon of gruesome distinction. Enjoy it”— Plik

The Dismemberer is a unique axe which is added to Fallout 3 with the Point Lookout add-on.

It looks identical to the regular axe, albeit more powerful, and has the ability to gib enemies without the Bloody Mess perk.

The Dismemberer can successfully strike about 480 times from full condition before breaking, roughly 20 hits less than the standard Axe.

This axe is given as a reward by Plik after completing Plik's Safari.