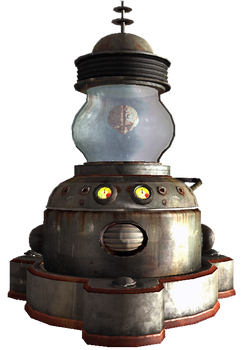 The Courier's brain is the isolated, conscious, and interactive brain of the Courier.

The Courier's brain is removed by the Think Tank of the Big Empty and subsequently forgotten about. Soon after, Dr. Mobius takes the opportunity to seize the brain and secretly take it away to his stronghold, the Forbidden Zone. The brain enjoys the peace and quiet of its new home, along with the relative safety and cleanliness, when compared to the wasteland.