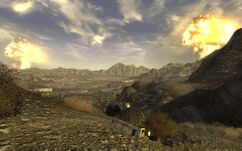 “America sleeps in the Divide - giants, beneath the earth. You saw one locked in the silo beneath you. There's more. Only takes a few of them, locked below ground, to tear apart the earth... and cast dust, sand... ash... into the skies above.”— Ulysses

The Apocalypse is a main quest and potential final quest in the Fallout: New Vegas add-on Lonesome Road.

This quest appears after the Courier deals with Ulysses and decide the fate of the nuclear missiles at the temple. Choosing any option other than canceling the launch begins this quest and fails The End. Leaving the temple and watching the DLC ending completes the quest. On returning to the Mojave after the ending slides, a nuclear explosion can be seen in the general vicinity of whichever territory was targeted (or both, if the player character chose to nuke both Legion and NCR).