Developed in early 2077 after the Anchorage Reclamation, the T-60 series of power armor was designed to eventually replace the T-51 power armor as the pinnacle of powered armor technology in the U.S. military arsenal. Incorporating design elements from the earlier T-45, the T-60 was deployed domestically among U.S. Army units just prior to the dropping of the bombs.[1]

This particular variation of power armor is much larger and bulkier than other recent portrayals, closer to the appearance of classic Fallout power armor. The set looks highly similar to the T-45d power armor, but with a few minor differences. The shoulders of the T-60 are composite, double layered and shorter than its T-45d predecessor. The T-45d shoulder plates are almost twice as long and are only a single piece of metal. The opening valve on the T-60 set is lower on the suit, larger and has a slot for a fusion core. The breastplate on the T-60 has two vertical handlebars, while the T-45d has a single horizontal handlebar. This particular set is superior to T-45 and T-51 armors.

Combining all these pieces makes T-60 power armor not only the power armor class with the most unique components by far, but also the only one in the game that can be completely assembled from unique parts.

Within this section is a list of scripted locations. 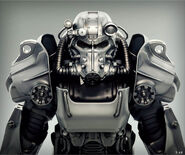 A sculpt of an action figure by Threezero

Screenshot from the Fallout 4 launch trailer

The Sole Survivor wearing the armor in The Wanderer trailer