Sentry bots are robots found in the Mojave Wasteland, Big MT and the Divide.

Its successor (manufactured only in limited amounts) is the bipedal Mark II sentry bot.

Similar to their Fallout 3 counterparts, sentry bots found in the Mojave have two arms that end with deadly weapons (a minigun or Gatling laser on the right arm, and a missile launcher on the left), and tripod legs with wheels. They also have armored heads and, as such, receive less damage from head shots. They are programmed with an authoritative, professional military personality, in contrast to the "gung-ho", patriotic personality of the Mister Gutsy models.

Because of their high health and destructive weapons, sentry bots are able combatants and can be difficult to put down when a low level. Like all robots, sentry bots have a combat inhibitor on the back of their chassis that, when disabled, will cause the sentry bot to berserk and attack everything near it. Being a robot, sentry bots have no defense against electromagnetic pulses, so they are heavily damaged against pulse grenades, mines, or any other weapon that produces EMPs. The sentry bots will also use one of the two weapons equipped upon them depending on distance. If the target is at a long range just at the right distance, they'll rely on the missile launcher to damage the target as well as using their secondary weapon (Gatling Laser or Minigun attachment). However, once the target reaches decent or close ranges, the sentry bot relies on using the minigun/gatling laser attachment instead of the missile launcher, possibly to avoid splash damage upon itself and its allies.

A hardened sentry bot is a tougher version of the military sentry bot. They are encountered along with hardened Mister Gutsies around the crashed vertibird in the Mojave Wasteland. Hardened sentry bots have nearly twice as much health as a standard sentry bot (500 hit points as opposed to 300 hit points). However (possibly due to a developer oversight) despite what the name might suggest, they are completely unarmored with a DT of 0, unlike a standard sentry bot which has an innate DT of 18, and thus can actually survive less damage than a standard model sentry bot. One result of their increased raw health is a greater resistance to pulse grenades. This conforms with the actual electrotechnical definition of the term "hardened", meaning that hardened electronics are much more resistant to electromagnetic pulses. 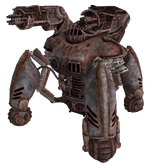 An antique,[1] prototype version that can be found in the museum inside REPCONN Headquarters. It has four wheels instead of the standard three, a set of arms stemming from its back and arching around over its shoulders. Where the arms would normally join the main body in current models, it includes 3 jets on each side, as used by Mister Gutsy/Handy robots.

Excerpt from the description of the antique model in REPCONN HQ's museum:

"Whoa, watch your step! You don't want to be facing this fearsome fellow if you accidentally stumble into a restricted area. Whether sporting the latest in dual miniguns, rockets, or laser cannons, the Sentrybot not only takes its job seriously, it also takes no prisoners! It's proof of RobCo's commitment to defense that these deadly guards are concealed in chambers throughout this facility, so let this be a warning: Watch where you step, or out'll come RobCo , guns blazing!

Exhibit Brought to You By Your Friends at RobCo"