Samurai's sword is a unique melee weapon added to Fallout 3 in the Mothership Zeta add-on.

The samurai's sword does higher damage than most other melee weapons, however, it lacks the special effects of Jingwei's shocksword or the Shishkebab. On the other hand, it has a higher critical damage than most bladed melee weapons, and has a relatively low AP cost compared to similar weapons, allowing for more attacks in V.A.T.S. The samurai sword is the oldest weapon in the game, originally being wielded by Toshiro Kago, a Japanese samurai.

The samurai's sword can successfully strike about 833 times from full condition before breaking.

The samurai's sword can be found in the waste disposal area of Zeta, accessible through the maintenance level (which can be entered only during the quest "Among the Stars"). It is at the outer southwest area in a closet full of medical supplies (see waste disposal article for a map (B) with the location marked). The sword should be acquired while Toshiro Kago still resides in the engineering core, for after his disappearance it will be gone from the shelves. It can, however, be found later, before the Lone Wanderer enters the Bridge: by simply killing Toshiro and looting his body. No one on the bridge will become hostile. 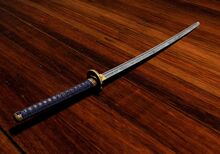 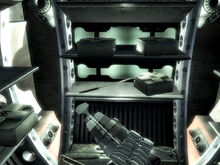