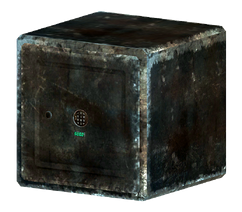 Safes are reinforced metal containers secured by locked doors, often used as a secure place to store valuable items. Safes are used in the Vault-Tec Vaults as well as in New California, the Capital Wasteland, and the Mojave Wasteland. Most are still functional and usable post-war.

They are locked by either a standard lock or a lock controlled by a nearby terminal, and require either lockpicking or hacking to unlock it. Inside may be a variety of items, including but not limited to caps, ammo, junk and weapons.

Safes permanently remain empty after being looted, giving the (usually false) appearance that they are safe storage containers for personal loot. In order to reset empty safes, you need to disable and then enable them with console commands. Finally, leave the current cell, save and then quit. After three days in game, the next time you return to the designated safe, it should be reloaded.

Safes owned by non-player characters will usually have a corresponding key that can either be pickpocketed, removed from their corpse, or occasionally given to you during a quest, such as A Manhandled Manservant.