Leader of the Blades
Thief (formerly) 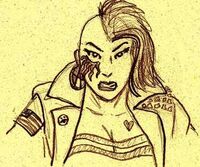 “The Regulators. They are the ones that really run Adytum. Not Zimmerman. They come here and drag our people back to Adytum as slaves. They kill us when we try to fight them off. Sometimes they just come and kill a couple of us to bring to Zimmerman , so they can say we tried to break into their town, or some other ridiculous story.”

Razor originally came to the Boneyard from the Hub, where she molded the Blades into a somewhat better force.

She became very distraught with the Regulators' take-over of Adytum, and fell into a state of depression when the Regulators murdered Jason Zimmerman, a very close friend. When the Regulators blamed the Blades for Jason's murder, she swore to bring hell upon Caleb and his men, no matter the cost.

Razor only appears in Fallout.