The Crater Raiders, or simply Raiders, and still referred to by some as the Diehards,[1][2][3] are a faction in the Fallout 76 update Wastelanders.

This group is a reappearance of one of the original raider gangs of Appalachia, after the original groups were nearly killed off. After these Raiders (composed of survivors of the original groups who fled Appalachia and new members picked up along the way) caught wind that people were returning to the land they once claimed for themselves, they and their leader Meg decided to come back and put a stop to anyone who would take their territory.

They set up a formidable base of operations at the crashed space station, which they renamed the Crater. It is inevitable that outsiders who drop by unannounced will not receive a warm welcome.[4]

The Blood Eagles, another raider gang unrelated to the Crater faction, also entered Appalachia at the same time, leading to tense interactions between their members. Their violence and sadism has led to their being declared monsters by many of the Crater Raiders. Other groups of recent raider arrivals include the Free Radicals, Edwin's gang, and Sargento's gang.

Meg and the Raiders initially encounter the player character in the quest Strange Bedfellows when Rose wishes to contact them as part of a request by the Vault 76 overseer to protect them from the threat of the Scorched Plague. Upon meeting the Vault Dwellers, Meg is not too keen on having her Raiders inoculated and only will agree to it if the Vault Dweller aids her lieutenant Aldridge with an attack on the Scorched west of the Philippi Battlefield Cemetery. This is only if she cannot be convinced that she is making the same mistakes that David Thorpe and the old raiders did by not cooperating with the other factions in the Responders, Free States, and Brotherhood of Steel to combat the Scorched and scorchbeasts. Aldridge is found wounded inside a semi-trailer, his team wiped out, and a scorchbeast corpse lying on top of the trailer.

After deciding whether to kill him or allow him to go out on his own terms, the Vault Dwellers return to tell Meg what happened, and she agrees to have the Raiders inoculated to protect them from the Scorched Plague. With the Raiders now safe from becoming more of the scorchbeast queen's minions, the Dwellers soon have to decide which faction they are going to join to get to the riches hidden within Vault 79, as they can either join Meg and the raiders or go against them by allying with Paige and the Settlers. This will affect the Dwellers' relationship with the two factions depending on their actions from then on.

Various Raider patrols may be randomly encountered throughout Appalachia fighting off threats such as super mutants, Scorched, or feral ghouls. Should the Dwellers choose to help them, they may speak to the Raiders afterward and receive a small boost in reputation with the Raiders, but only once Strange Bedfellows is completed.

These are the weakest variant of Raiders, people attempting to reclaim Appalachia by any means possible.

Raider scum may appear in random encounters. One involves a Raider who reflects on noisy nights in dialogue. 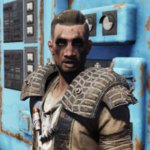 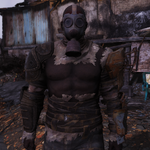 Raider scavvers are members of the Crater group searching for good materials to take advantage of in Appalachia. They may appear in random encounters of roaming Raider bands battling various creatures, or other random encounters such as attempting to lockpick a safe. 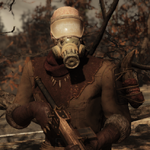 Raider veterans may appear in random encounters of roaming Raider bands battling various creatures, and can also be found at the Crater. 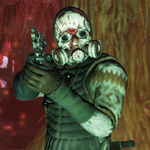 Raider fiends are one of the strongest variants of Raiders. They may appear in random encounters of roaming Raider bands battling various creatures, and can also be found at the Crater. 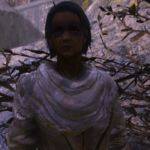 Raider hunters are employed by Rocksy to hunt down former raiders during the daily quest Retirement Plan. Several options in conversation include asking for their help dealing with the former Raider, convincing them to go cause trouble at Foundation, or telling them to give up the search and let the player character handle it. 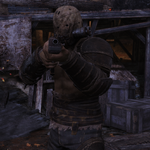 Raider thieves have the assigned duty to steal from unsuspecting groups, such as the Settlers. The player character may have to negotiate or kill a Raider thief during the daily quest Vital Equipment. One Raider thief can often be found fighting the robots at relay tower HG-B7-09.

Raider reavers are the most experienced type of Raider. They may appear in random encounters of roaming Raider bands battling various creatures, and can also be found at the Crater.

Raiders appear in Fallout 76, introduced in the Wastelanders update and further expanded upon in Steel Dawn.

Since One Wasteland For All was released, a bug may occur that occasionally causes raider thieves to be frenzied, attacking everything on sight, including other Raiders.[验证逾期]

Raiders at the Bailey family cabin 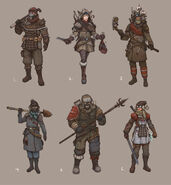