Paige is the leader of the Settlers living in Appalachia.

The former head of a Construction Workers Union in Washington, D.C.,[1] Paige is the leader of the Settlers who set up at Foundation.

At some point between the trailer release and final release, Paige's hair was changed from a short cut covering his head to balding.

Paige appears only in Fallout 76, introduced in the Wastelanders update. 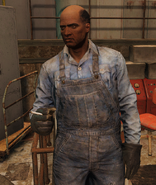