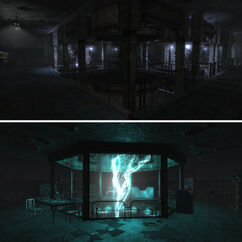 “...But with everyone needed to help defend against the Enclave, we have no one to send on a recovery mission. So I'm going to have you travel to the Olney Powerworks to secure some tech for us.”— Paladin Tristan

Olney Powerworks is an old power plant accessible through the Olney sewers, added to Fallout 3 in the Broken Steel add-on. The player character is sent here in order to find a Tesla coil during the Shock Value quest.

The powerworks were owned by PPE before the Great War and may have been the site of Olney's main power supply as well as an experimental testing ground for unorthodox power sources as evidenced by the presence of a Tesla coil.

After going through the Old Olney S. Wilson Building, head up the stairs. The left hallway has a door connected to a very-hard locked terminal which leads directly to the small lab that houses the Tesla coil. The right path leads into a generator room guarded by sentry bots and connects to a storage area with a workbench. Up another flight of stairs is a hard-locked door that opens to a short hallway with six radiation emitters.

The hallway leads to a room filled with transformers of arcing electricity. Through another hard-locked door is an orange lit hallway with computer servers lining the walls. To the left is a blast door guarded by automated turrets and to the right is the door that leads to the main laboratory and the Tesla coil. There are other small rooms are on the side of the main room that was for conducting electrical experiments. A doorway leads downstairs to where the Tesla coil can be retrieved. In the same hallway, there is a ladder that leads back up to Old Olney.

Olney Powerworks appears only in the Fallout 3 add-on Broken Steel.

Any sentry bots that are destroyed before shutting them down with the terminals, then using the terminal to shut them down will have the "Talk" option instead of the "Search" option. Shooting them once or striking them with any weapon will give additional XP as if they had been killed again. [已核实]