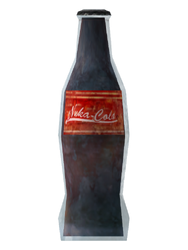 Nuka-Cola is a consumable item in Fallout: New Vegas.

There is a Nuka-Cola plant in the Washington, D.C Area.

With the Honest Hearts add-on installed, the Courier has access to a recipe which enables the creation of a home-brewed version of the drink. Nuka-Cola is also used when crafting super stimpaks.