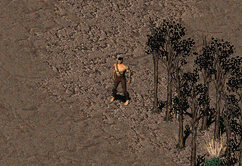 Nagor is a villager from Arroyo in 2241.

The Chosen One has known Nagor since he was an infant, and has always helped him when possible. He owns a dog, Smoke, who often wanders off into the wild.

Nagor has a lot of family within Arroyo. The most distant of family starts at the Vault Dweller and Pat. Nagor's mother is Morlis and the Village Elder is his aunt. As younger cousin of The Chosen One, he seems to look up to him at times. Another cousin of Nagor is the Bishop Child.

Nagor appears only in Fallout 2.