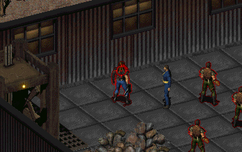 Great wanamingo mine
Sheriff Marion
3000 XP
$1000
前一任务：
Find out who cut the whore
后一任务：
-
“He's too dangerous to let him set up shop right near town. I'll give you $1000 to go out to the Great wanamingo mine, just west of town, and kill Frog and his gang. He's one bad hombre, though, so watch yourself.”— Sheriff Earl Marion

While working for Sheriff Marion of Redding, the Chosen One will be commissioned to kill Frog Morton and his gang, as they are causing trouble for the town. He and his band of ruffians can be found hiding out near the elevator entrance to the wanamingo mine in the west side of town. Upon killing Frog Morton and his gang you will be awarded 3000 XP, as well as $1000 after returning to the Sheriff.