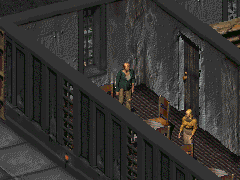 Jo is suspicious of the Slags. Find out about the dead bodies at the Ghost Farm and find out what happened to Karl
Go to the Den and tell Karl it's alright to come back home

Karl is a mentally disturbed drunkard lounging around Mom's Diner in 2241.

Asking Karl about "his story" will make him sober up and tell a frightening tale. His farm was razed by ghosts, his crops failed, and he fled to the Den.

Go to the Den and tell Karl it's alright to come back home: Once the Chosen One discovers the Ghost Farm he is sent by Jo to find Karl and make sure that the Slags didn't draw him up by his innards. Report back to Jo once you find him so Modoc and the Slags can make peace. Hurry though, because it might be too late to report back to Modoc before they kill the Slags.

It is possible to upset Karl, whereupon he refuses to talk to you about "his story". You will need to give him a beer (needs to be in your inventory), but he will pass out subsequently. When he wakes up after a few hours, Karl will be more talkative.

Karl is listed under the Party.txt, it can be assumed he had to be escorted.

The dialogue option to ask Karl about his story requires an Intelligence of 10, which was explained to be a typo in scripting.