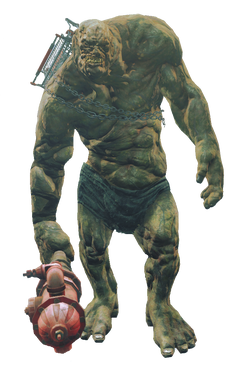 Institute super mutants are the variant of super mutant found throughout the Commonwealth, Nuka-World and the Island in 2287. These mutants were created by the Institute by means of exposure to the Forced Evolutionary Virus (FEV). They are massive, muscle-bound creatures with an innate immunity to radiation and disease. They are most frequently encountered in central Boston, and can also be found in Fallon's department store, Fort Strong, Trinity Tower, Revere satellite array, Big John's Salvage, Gwinnett restaurant, and several other locations all throughout the Commonwealth―most of which can be identified by the telltale signs of hanging meat bags, twisted girders protruding out of the ground, cages, and gory waste piles with which they enjoy decorating their surroundings.

In Far Harbor, a group of super mutants have traveled to the Island and are located in the Vim! Pop factory, National Park HQ and Aldersea Day Spa. Similarly, in Nuka-World, small bands of mutants can occasionally be found roaming the plains and foothills surrounding the amusement park, though they tend to stay outside its walls.

The Institute's strain of super mutant shares many similar traits with the West Coast and Vault 87 breeds, such as caging prey, bagging body parts and feeling superior to humankind. Regardless, terminal entry 0769-CM22 aboard The Prydwen states that the Commonwealth mutants are "quite different" from those found in the Capital Wasteland, including anatomical differences.

The super mutants encountered within the Commonwealth are in fact the unfortunate victims of failed FEV experiments, created and disposed of by the Institute. In August of 2178, the Institute relaunched its FEV program under the direction of a man named Dr. Frederick, presumably with stored samples from the post-War experiment that created Swan.[1] The FEV research lab was then constructed in the back of the Bioscience Division wing and a team of researchers began experimenting with different strains of the FEV virus. Two years after the start of the experiment, in the year 2180, a horde of super mutants attacked Diamond City, but were repelled by the newly formed group known as the Commonwealth Minutemen.

To supply the program with test subjects, the Institute abducted wastelanders from all over the Commonwealth to experiment on. These subjects were examined, logged, then submerged directly into FEV. If they survived the process, they were subjected to multiple experiments and cognitive tests. Once finished, some were discarded back to the Commonwealth, creating the scourge of mutants currently present in the year 2287. This method of trial and error was used to perfect different strains of the FEV, with the overall goal of improving the synthetic organics program. In March of 2224, the synthetic organics research team had come to an impasse. They had perfected two promising strains of FEV; however, these were not adequate to further their research, as their test subjects had been exposed to an excessive amount of radiation. The team decided to explore new avenues of exploration in order to advance research; however, the Directorate decided to continue the FEV program in hopes of learning more about the FEV's potential.

The much-needed breakthrough came about in 2227, after acquiring the source of undamaged genetic code, allowing the third generation synth project to spin off from the FEV research initiative. The FEV research effort itself continued for several more decades, despite producing no useful data―except for manufacturing more super mutants for the surface to contend with.

In April of 2286, Dr. Brian Virgil succeeded Dr. Syverson as head of the project, and it quickly became evident to him that FEV program had run its course, having produced no new data within the past ten years. Virgil decided he could no longer live with himself knowing that he was ruining the lives of so many innocent people. He tried to lodge a formal complaint with the Directorate. When no reaction came, Virgil destroyed the research lab and all of the research, which became known as "Incident V" within the Institute. He then proceeded to transform himself into a super mutant using a unique strain of FEV to flee into the Glowing Sea. The FEV program was finally ended after over one hundred years of abduction and experimentation. At the time of the Sole Survivor's arrival at the Institute, the research wing remains in a security lockdown.

The existence of the behemoths suggests a link with the Vault 87 strain of FEV, as they are the only super mutants known to continue growing with age. However, the green-brown coloration is closer to that of the Mariposa strain of FEV, specifically resembling the super mutants seen in Fallout: New Vegas.

Unlike their counterparts from the Capital Wasteland, the Commonwealth mutants possess a relatively advanced understanding of armor, weapons, and at least some minor knowledge of craftsmanship compared to their brethren. They appear to trade stronger physiques for the knowledge to utilize/create weapon and armor mods, and even have access to reprogrammed security systems such as searchlights and automated turrets, not unlike their far-western cousins.

Higher-rank super mutants show more intelligence than their brethren, speaking more eloquently, and utilizing some advanced tactics such as cover, shifting position and taking high ground. They also are capable of following a chain of command, setting up traps and ambushes, and using human captives as bait. Their lesser brothers, however, will often ignore cover and simply try to get as close to an enemy as possible, even when armed with long-range weaponry.

Both Institute and Vault 87 mutants appear to share the ability to be somewhat educated due to the existence of mutants such as Fawkes and Uncle Leo from Fallout 3 and Strong and Erickson in Fallout 4.

Like their Vault 87 brethren, a number of the Commonwealth super mutants seem to want to preserve their new species, since they can be overheard speaking about "green stuff" in some areas (such as Trinity Tower).

Super mutants can randomly be encountered around the Commonwealth in small groups, usually raiding parties, which can attack player character-made settlements. Much larger groups can be found infesting various buildings throughout the wastes. They have developed a unique relationship with mutant hounds and will utilize these beastly creatures as attack dogs, usually encountered in groups of 1-3. Mutant hounds are unique to Fallout 4 super mutants, instead of the centaurs that have normally accompanied them in past installments of the game series.

A super mutant that will run at its enemy with a beeping mini nuke in its arm. It will then detonate itself while in close proximity, killing its enemy and itself in a fiery, nuclear explosion. Shooting the mini nuke in the suicider's hand or targeting the right arm in V.A.T.S. will cause the mutant to explode prematurely, killing it instantly. As a result, shooting the bomb from afar is one of the most effective ways to dispatch them, and potentially other nearby enemies as well. If one is desperate to kill a suicider and the only weapon types available are unarmed and/or melee, the player may either sneak attack it, or run up to it, strike it, step back a bit, and repeat until it's dead (though the latter is not advised as one missed attack will allow the suicider to detonate the mini nuke, and accidentally hitting the mini nuke with either type of attack will detonate it). The suicider can be detected before it is seen by listening for the beeping of its mini nuke. If the suicider is killed without detonating the payload, which can be done with a headshot or body shot, a mini nuke can be looted from its corpse; otherwise, only nuclear material will be found on its remains.

Behemoths are the most powerful super mutants by far, towering above any player character, at about 13 feet (4 m) tall. These super mutants are the oldest and strongest of their kind, and are many times larger than any other humanoid creature, almost as large as a mirelurk queen. Unlike regular super mutants they will not speak; instead, they will make monstrous roars. They are armed with a fire hydrant mounted on a large pipe. Other than that, they have the ability to throw heavy boulders at their enemies. Either way, both weapons are heavy hitters and will cause major damage against any enemy smaller than them. They carry a cage made from shopping carts on their back, similarly to their Vault 87 counterparts, which they use to carry boulders that they use during combat.

Epic behemoths are an immensely powerful variation of average super mutant behemoths, and, to some extent, are more clever in combat. They tend to appear in forest areas, which they may use to their advantage by hiding behind trees. They also will block their face with their hand quite often, especially when fighting at melee range, allowing for a chance to get in several hits. They are more upright than many standard behemoths in appearance, and although they are quicker, they use similar fighting techniques, such as smashing, knocking the player character down and hurling boulders. Aside from being able to sustain more damage, they can be crippled if low on health, and will slump to the ground on their side, where they can be finished off. Template:Stats creature FO4 Template:Stats creature FO4 Template:Stats creature FO4

When attacking with a melee weapon (usually):

When throwing a grenade:

When a grenade is thrown:

When a comrade dies within a second's line of sight:

When going from Hidden to Caution:

When going from Caution to Danger:

When going from Danger to Caution:

When going from Caution to Hidden: