Giant mantises are mutated insects found in the Mojave Wasteland in 2281.

Giant mantises are mutated praying mantises created by the horticultural experiments that took place in Vault 22. They have since escaped from the vault and have spread into the Mojave Wasteland. Compared to other mutant creatures, their biological traits have remained relatively unchanged when compared with the original specimen, except for significantly increased size. They are still much smaller than humans, but make up for that by attacking in swarms whenever possible. Mantis eggs and mantis forelegs may be taken from their dead bodies.

Because of the height difference, giant mantises' attacks mainly consist of jumping and slicing its target in mid-air with their forelegs. If a mantis' antennae becomes crippled, it will become frenzied and the mantis will begin to attack anything within reach. There are quite a few mantises on the way to Jacobstown and around Spring Mt. Ranch State Park.

This variant is the standard giant mantis encountered later in the game around Spring Mt. Ranch State Park or on the way to Jacobstown. They can be found in groups or scattered around these areas when encountered. This variant is also the majority of mantises encountered in Vault 22.

The giant mantis female is larger and more powerful than the normal giant mantis. They may have mantis eggs in their inventory. One can be found in the caves of Vault 22.

Young giant mantis. They are much smaller and weaker than adult mantises. Some nymphs can be killed simply by walking over them. They are usually found early in the game at the Goodsprings schoolhouse and the Nevada Highway Patrol station, but they can also be found in Vault 11, Vault 22 and other areas.

The younger, smaller and weaker version of the Zion mantis found in Zion Canyon. Significantly stronger than the Mojave mantis nymphs.

This variation of the giant mantis can be found in Zion Canyon. They are the strongest mantis in the game.

The mantis XP glitch still remains with Zion mantises. A transfer of legs could lead to 200 XP gained at a time, dependent on level. [已验证] 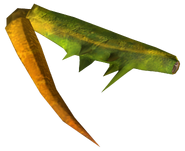 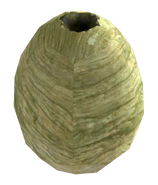