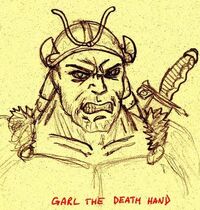 “That's what I like. Initiative. But you should not have killed them without my orders. I don't like too much initiative.”