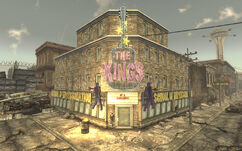 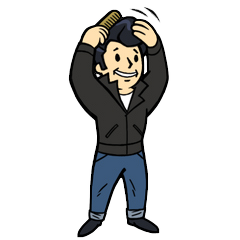 “If they're comin' over here now, it's got to be for a reason. I didn't want to believe the rumors that they're looking to take over Vegas, but now...”— The King

G.I. Blues is a side quest and an achievement/trophy in Fallout: New Vegas.

The first request from The King is to hire the bodyguard named Orris, and see why he's so popular with the local tourists.

Hiring him the first time

The King will supply the Courier with the necessary 200 caps in order to hire Orris. Orris can be found among the other bodyguards in Freeside, near the north entrance. The competing guards offer protection services to incoming tourists of the town. The King instructs the Courier to pose as a tourist, hire Orris, and investigate his suspicions.

Once hired, Orris will boast about his reputation as a bodyguard and will give a quick tour while progressing through Freeside. He tells the player character to follow him closely without sidetracking, giving quick rundowns of the town's notable locations. He will first explain the Old Mormon Fort, the first destination encountered. Continuing through the gate, Orris will guide the Courier past King's School of Impersonation, the Atomic Wrangler Casino, and the Silver Rush. Finally, the the Strip North Gate will come into view, the desired destination of the tour.

Right before the tour concludes, Orris will insist on taking a detour, sensing some "thugs" ahead. Following the detour, Orris will suddenly run ahead and shoot his gun at four thugs waiting to ambush the party. He will then reassure the Courier that there's "nothing to worry about," and will continue towards the conclusion of the tour. The option to further examine the sudden turn of events is provided by doing one of the following:

Once the Courier has acquired proof that Orris is a fraud, they can report their findings back to The King. He will tell them that Orris will be pulled out of the streets "when no one's looking." Now that the Courier has proven to be reliable, The King will task them with another job that is a "little bit more important."

If the Courier chooses not to follow Orris and ignored his detour by going straight to the Strip's entrance, Orris will run to the Courier and say the "thugs" were not harmless after all and that he is not often mistaken.

Hiring him the second time

There are two possible ways in which Orris must be hired a second time:

If no evidence is found regarding Orris' business practices, reporting Orris' legitimacy back to The King will not satisfy him. The King will instruct the Courier to hire Orris again to investigate further, but this time he will not provide the required 200 cap payment. Once rehired, Orris will lead the player character directly to the final destination of the tour. He will claim that his men, the four thugs from earlier, saw the Courier "being friendly" with The King and he will turn hostile, forcing a fight with him and the thugs. Attacking and killing Orris instead of hiring him carries no penalty and still allows the quest to be completed. After they have been dealt with, report back to The King. Shrugging off the error with Orris, The King will task the Courier with another job.

The King will claim that the town's locals have resented the sheer number of newcomers since the Strip was built. The newcomers, which are mostly made up of NCR citizens, in turn, grew tired of being resented. And so, instances of violence between the locals and the NCR citizens have occurred. Some of The King's friends have fallen victim to this conflict and he asks the Courier to investigate who caused the attacks. The King's friends are located in the Old Mormon Fort, currently recovering from the attack.

The victims will be found in the tent to the right of the fort's entrance. once you enter the fort. Speak to Roy, who wishes to be left alone with his friend and fellow victim. Mentioning The King will change his attitude, and he will then want to reveal everything he can to find their attackers. He will say that they were attacked at night after they had spent their caps at the Atomic Wrangler. They ended up in the squatter side of town, where they engaged in an argument against two "big guys" after asking them if they were locals. He managed to only get a quick glance, as he found himself face down in the dirt for the duration of the fight. He will prompt the Courier to talk to his friend Wayne, the other victim, who saw more action than he did. As Wayne suffered more from the fight, he has trouble remembering what he saw. At first, he will claim that the men were "better dressed" than most Freesiders. Upon further thought, he recalls that one of the guys uttered the name "Lou Tenant." Roy will correct him, saying he likely heard "Lieutenant."

Return to The King and inform him that his friends were attacked by soldiers. He will ask the Courier to look around the squatter areas where the "NCR folk hang" so that he can clear up the rumor that the NCR is taking over much of New Vegas. He will also ask the Courier to talk to Julie Farkas, who might have some information about the presence of the NCR in Freeside.

The Courier is tasked with finding out why increasing numbers of NCR citizens are entering the town. Travel to the squatter areas, where NCR missionaries can be found.

Talking to the missionaries, they will ask the player character if they are a citizen of the NCR. By claiming NCR citizenship, they will administer a quick test to "verify citizenship status." The three questions are as follows:

Correct answers to the questions:

The NCR soup kitchen is located at the train station area in the northwest corner of Freeside. The path toward the soup kitchen will be difficult to follow, as it will be somewhat hidden by rubble. The entrance will be guarded by two NCR troopers in casual attire who will ask for the password in order to enter the soup kitchen. The Courier can ask the trooper on the left for permission to speak to the Major with a Speech check of 30.[已验证]

Once inside, talk to Major Elizabeth Kieran, the administrator of the relief effort. She will be at the front counter and will give free food upon speaking with her. If the Courier asks her why she only serves food to NCR citizens, she will say that it isn't a "pleasant topic of conservation." If Julie Farkas was spoken to earlier, mentioning her name will result in Kieran revealing more information.

Conflict with the Kings

The additional information will shed light on an earlier conflict with the Kings. Kieran will claim that she sent an envoy to The King before, offering to coordinate the relief effort. However, the envoy returned brutally beaten. Due to this, Kieran was ordered by her superiors to scrap the project. She continued the effort anyway, but with fewer supplies to distribute and therefore, can only distribute food to NCR citizens and not the rest of Freeside.

Upon returning to The King with this new information, Pacer, The King's righthand man, will interfere and speak to the Courier before they can approach The King. Pacer will claim that Kieran's side of the story is a lie, and it is nothing to bother The King with. He claims the envoy they sent was more of a "spy" that "wasn't tough enough to last in Freeside." From here, the player character can respond in one of several ways:

Any of these options will lead to Pacer leaving the premises, saying that he has "business" to take care of. The King can then be informed that the NCR is distributing food to NCR citizens only. This will lead The King to conclude about the "goons" attacking locals. He will be surprised if you mention the envoy who was sent to talk to him, apparent that he had no knowledge of such an occurrence. Just as The King is piecing together the evidence, a Kings gang member will interrupt the conversation. He will say that a shootout between Pacer and the NCR has erupted in the train station. The King will ask you to defuse the situation right away.

Proceeding to the train station, nearby the NCR soup kitchen, deceased King's gang members are scattered on the ground. Pacer hiding behind a bus stop shelter, receiving heavy fire from NCR troopers. If The King was informed of the envoy sent by Major Kieran, the Courier can holster their weapons or drop their fists and approach the soldiers. Major Kieran will be standing behind the NCR troopers. Tell her that The King is willing to cooperate. Kieran will be apprehensive at first, once again reiterating the conflict with the envoy. The Courier can inform her that The King was not responsible for the violence against the envoy and Kieran will agree to work with the Kings. She tells her troopers to stand down, and the conflict ends peacefully. Upon returning to The King with news of the resolution, he will say that "it's time for a little more talkin' and a little less fightin'."

On the other hand, if the Courier does not, or cannot, inform The King of the envoy, the same interruption will take place during the conversation with him, and The King will instruct the Courier to "head to the supply drop building and see if Pacer needs help". Pacer can then be found at the bus stop near the ruined store where the handouts were taking place. Upon arrival, Pacer can be approached and shaken down for his remaining 150 caps with a 50 Barter check. Pacer will run away and the player character will have to fight the troops. NCR infamy and negative Karma will be gained for killing them. Returning to The King with news that the situation ended this way results in The King's relief that it has been resolved, gaining Freeside fame.

Upon completing all of The King's requests, he will offer a one-time favor from him. The options for the favor are:

One will also be awarded with 1500 Experience Points.