The Fusion Flea Supreme[1][2] is a nuclear vehicle found throughout the wastelands of the former United States.

A pre-War ultra-sub-compact city transport featuring an advanced Chryslus[验证逾期] nuclear-powered engine.[Non-game 1] The one passenger vehicle can be commonly found throughout the wastelands, and sometimes seen less frequently in regions such as the Mojave Desert.

Structurally, the entrance to the driver's seat was achieved through a lift-off roof windshield combination with a latch on one side. The East Coast models are blue in color with three wheels, two in the front and one in the back. The Mojave variants are a green-brown in color and lack the third wheel in the rear. They also feature a rear engine, protruding from behind the driver's seat. If shot at, some of the vehicles will burn briefly and then explode.

There are 54 Fusion Flea Supremes in Appalachia, including at locations such as:

On the Ivanpah race track

On the race track

Flush to the ground, no third wheel view

No third wheel, bottom of the vehicle

Another view of bottom

Tipped off a truck in the El Dorado Dry Lake

The Flea in post-War Fallout 4

View from the driver's seat

Above the Saugus River

Rusted fusion fleas outside Blackwater Mine

In The Art of Fallout 4 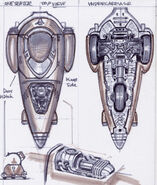 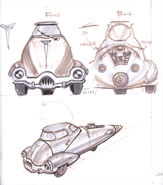