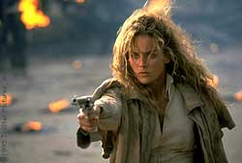 Frieda Van Graff is the owner and operator of Frieda's Firearms store in Hoover Dam in 2253.

Frieda is not originally from Hoover Dam. She hails from Redding, and was born into the Van Graff family. She was born to Tiaret Van Graff, and is the sister of prisoner Jean-Baptiste Cutting. She does not know very much about her half-brother, except for that he turned up missing a few years ago.

Frieda is attractive, but she is very hard, like an old bar-fly. She doesn't take any crap from anyone and would just as soon shoot you as to serve you. She expects a courteous customer, and if she doesn't feel respected, she refuses to do business until the customer changes their ways.[1]

Frieda has not appeared nor is she mentioned in any published game, however other members of the Van Graff Family are present in Fallout: New Vegas. She was to appear only in Van Buren, the canceled Fallout 3 by Black Isle Studios. It is not certain if she will appear in any future Fallout game.