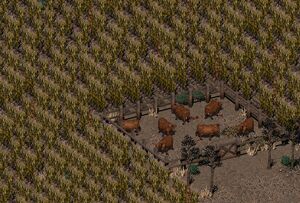 Nourishment is essential to human survival, especially in a post-nuclear world. In the Fallout games, people seek out various methods of producing and gathering food, usually through agriculture.

The primary method of providing food for settlements, corn and mutated cabbage are the primary crops cultivated in the Core Region. They enable settlements to become self sufficent instead of relying on caravan deliveries. Another important element is livestock herding, where brahmin are most popular due to their hardy nature and extreme usability.

In Fallout, the Hub is the biggest source of food in the region, with crop fields and brahmin pens surrounding the city. Along with water, it's one of their main exports. Smaller settlements, like Junktown or Adytum are partially independent, having livestock and fields of their own (or even hydroponic farms), but still relying on the Hub for supplies. The Brotherhood of Steel completely relies on food and water caravans to survive. Only Shady Sands is fully independent.

In Fallout 2, the Hub, as part of the NCR, is the biggest exporter of livestock in the region, with their brahmin herds being a highly sought good. Regular cattle drives cross the wastelands, expanding its control northwards. Two other cities also provide large amounts of food to the wastelands, namely Modoc (though it has fallen on hard times by 2241) and San Francisco (fish). Smaller cities have small scale agriculture (like Klamath or Gecko), gaining a degree of independence from food deliveries. Only Vault City can be seen as totally self-sufficent in this regard, as only it has reliable food synthesizers dating to pre-war days.

In Fallout 3, despite 200 years having passed, no notable efforts to estabilish any sort of agriculture are present, apart from hydroponic farms on the Rivet City carrier.

In Fallout: New Vegas, the Mojave Wasteland bustles with various attempts at creating a stable agriculture. Bighorners and brahmins are a popular choice for livestock, while maize and other hardy plants are cultivated in the arid climate by dedicated farmers. The NCR in particular devotes a lot of effort into creating a stable source of food, with the Thaler Act's NCR sharecropper farms and OSI's research into food production, as it projects famine in the Republic in about ten years or so.

Water is the essence of life, necessary for daily survival. In the wastelands, where most water is contaminated and needs to be purified (a simple, if tedious process), water merchants can hold the ultimate power.

In Fallout, it is the underlying theme of the Hub, which is the primary source of drinkable water for most cities, having access to a water tower and able to pump large quantities of it for sale. The tower was the cause of much strife in the city, as different merchant companies vied for control of it. Settlements usually have sources of water of their own (wells), but usally they only cover the most basic of needs.

In Fallout 2, water availability and distribution is much less emphasized, except for Modoc, where a catastrophic drought has hit the town hard, putting on the brink of collapse, forcing it to forge an alliance with the Slags of Ghost Farm.

In Fallout 3, water availability is the underlying theme of the game, though portrayed in an inconsistent and counterfactual way (such as radiated water being impossible to treat, even though it's just a question of filtering it through uncontaminated sand).

In Fallout: New Vegas, water is an important commodity and one of the catalysts for war - the Hoover Dam not only produces power but also provides clean, drinkable water in nearly limitless quantities.