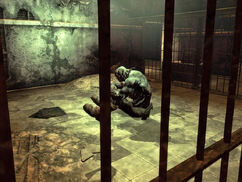 Head to the police station in the southwest of the Sierra Madre resort.

Head down into the police station basement where you will be greeted by the voice of God. There is a speaker in the tunnel just ahead; destroy it by tossing a frag grenade, which can be found upstairs in the toilet cistern next to Dean's secret stash. You may also just pass quickly through the room and the beeping on your collar will stop once you reach the other side.

Continue through the basement until you reach a desk with a broken radio on it. God will instruct you to pick up the holotape on the desk and informs you what to do with it.

Head back upstairs and play the holotape in front of Dog's cell; this will bring out God from his 'cell' and he will start a conversation with the player. During the conversation, the player will have a choice whether to convince God to come along as he is or to play the recording of Father Elijah in order to force Dog back out again, who will follow along willingly. This choice determines who the companion will be and which related perk you will gain. You can, however, change the companion from God to Dog and vice versa at any time when he is your companion by playing the appropriate recordings (Elijah's for Dog, and God's for God). Choosing to allow God to remain in control or summoning Dog at any point will have an impact later in the storyline.

Regardless of the player's choice, the quest completes as soon as the cell is unlocked.

IMPORTANT This may can be fixed by reverting the quest by using the console "setstage 010139df 0". Not working, though. Can be fixed by console SetStage XX013A3F,5 where XX is the your code regarding the DLC's installed (see Bug with Dog"

The 4 'collars' gathered at the Villa fountain