“Those Feral Ghouls that prefer the dark, dank underground? They ARE basically mindless zombies. So kill as many as you damn well please.”— Three Dog

Feral ghouls are creatures found in the Capital Wasteland in 2277. They are ghouls who have lost their sanity and ability to reason due to radiation, making them aggressive to anyone who isn't another ghoul. Feral ghouls are partially held by many humans to be responsible for the discrimination shown towards all ghouls, whether or not they have retained their mental faculties. They are referred to by Three Dog in one of his broadcasts as "mindless zombies" and in another, he describes their condition with obvious disgust as "Ew, ghoulification!"

Feral ghouls often give a loud, low-pitched screech or growl before attacking enemies. This can be helpful in dark places or areas with objects blocking the Lone Wanderer's view, especially in the metro system and the Dunwich Building. As with normal ghouls, ferals are entirely resistant to radiation. This makes a glowing one especially dangerous when encountered with regular ferals, as they constantly emit radiation that will heal the ghouls within the surrounding area.

Feral ghouls attack with no strategy. They rush foes in one massive onslaught. At first, they attack with a running over-the-head strike. When close to an enemy, they will swipe at them horizontally or diagonally.

The basic feral ghoul variant in Fallout 3 wears only a pair of tattered shorts (or ripped pants) and is noticeably weaker than standard human opponents. They are easily defeated with one or two headshots or a solid hit with a decent weapon in close quarters combat. Despite their noisy shrieks and remarkable speed, they are not much of a threat unless they outnumber their enemies.

Some feral ghouls come in different colors as well as different types. Some are a "healthy" pink color while others are a grimy gray color. Their skin colors are different depending on what ethnicity they were prior to ghoulification.

Notably, feral ghouls can drop rare pass cards in blue and red colors, and they have the highest chance in the game for a creature to drop them, at a 1.5% chance.

These ghouls are seen wearing the remains of pre-War combat armor commonly used by the National Guard and U.S. Army. The majority of them can be found in abandoned metro tunnels and buildings, where people who couldn't gain entrance to the vaults often sought refuge.

Although what remains of their armor gives them some protection, roamers can still be brought down quickly with most weapons. However, they do have a tendency to appear in small groups and can be dangerous to a poorly equipped wastelander. Due to the ruined condition of their armor, it can't be taken after they are killed.

Feral ghoul reavers, introduced by the Broken Steel add-on, are extremely strong ferals clothed in what appears to be the remains of metal armor. Reavers' skin may, upon close inspection, appear to bubble and burn, emitting radiation and dark green smoke. If a reaver is killed by a critical hit from an energy weapon, the smoke will continue to emanate from the remains.

Tougher than other ghouls and more than twice as durable as a sentry bot or deathclaw, reavers are (unlike their Mojave counterparts) one of the most formidable enemies in the game. They are extremely quick, and their lunge attack can knock their targets back some distance. Reavers have the unique ability to throw pieces of their own body at a target. These chunks, thrown with deadly accuracy and range, explode like a grenade and can easily cripple limbs. The chunks also emit radiation.

Reavers, unlike deathclaws, seem to be highly perceptive and can detect their foes even in sneak mode, including those wearing a Stealth Boy or Chinese stealth armor, or even both. Feral ghoul reavers have no swimming scripts or animations, so they "walk" underwater.

Glowing ones are feral ghouls that have absorbed massive amounts of radiation. Their irradiated skin is a pale translucent green that continually produces a soft glow. Their legs are draped in rags similar to those worn by the standard version of a feral ghoul. In battle, they sometimes release a massive burst of radiation, severely injuring and irradiating enemies and healing any other nearby feral ghouls.

Swamp ghouls are ferals that inhabit the swamps of Point Lookout. Swamp ghouls wear a tattered pair of shorts commonly worn by tribals. They exhibit the same characteristics as Capital Wasteland ghouls, but are paler in color and considerably weaker, and they only pose a genuine threat in numbers.

They can be found in various locations in Point Lookout, with high concentrations at the Turtledove Detention Camp and the Ark & Dove resting grounds along with the other types of feral ghouls, including feral ghoul reavers and glowing ones.

Found throughout all of the Capital Wasteland, in subway metros and Point Lookout.

Feral ghouls appear in Fallout 3 and its add-ons Broken Steel and Point Lookout. 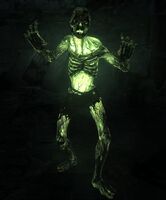 Glowing one emitting a radiation wave

Friendly glowing one Sun of Atom

Meat and Ethyl in The Chop Shop

A caged Stefan in the Red Racer factory's CEO offices

Mr. Keller after mutating into a glowing one in the National Guard depot bunker 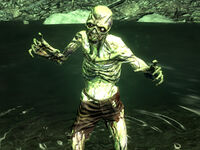 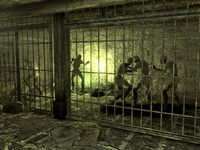 Group of swamp ghouls caged in the trapper shack's basement 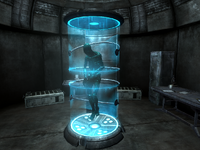 A feral ghoul in cryogenic stasis in the Raven Rock 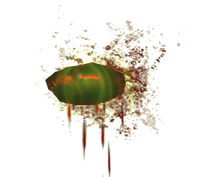