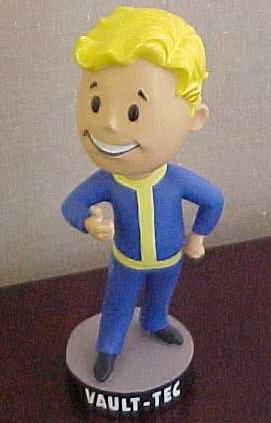 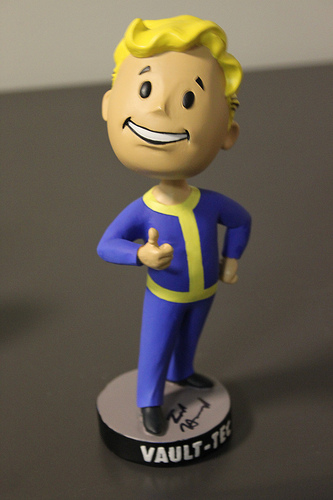 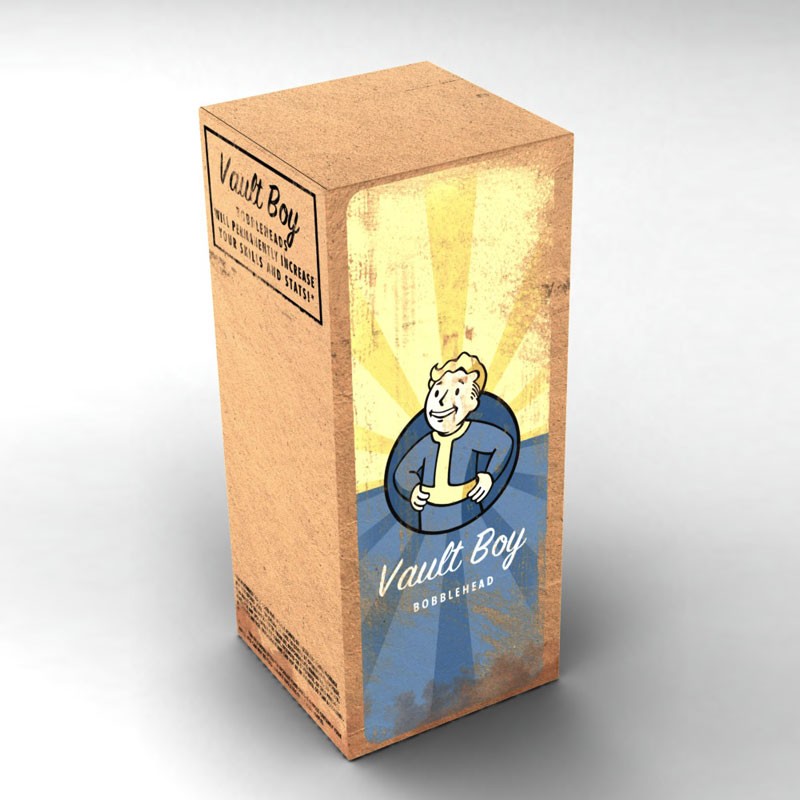 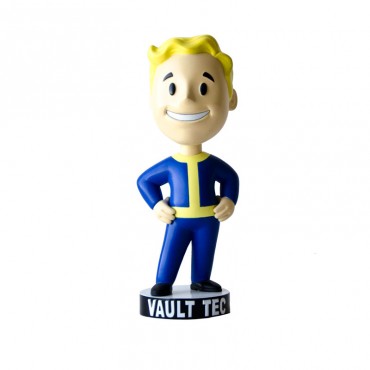 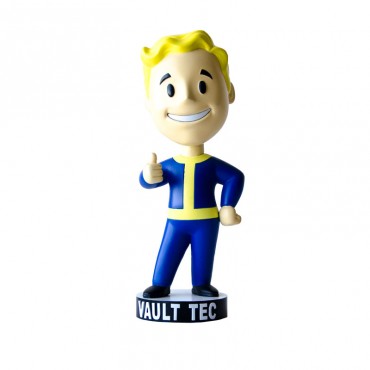 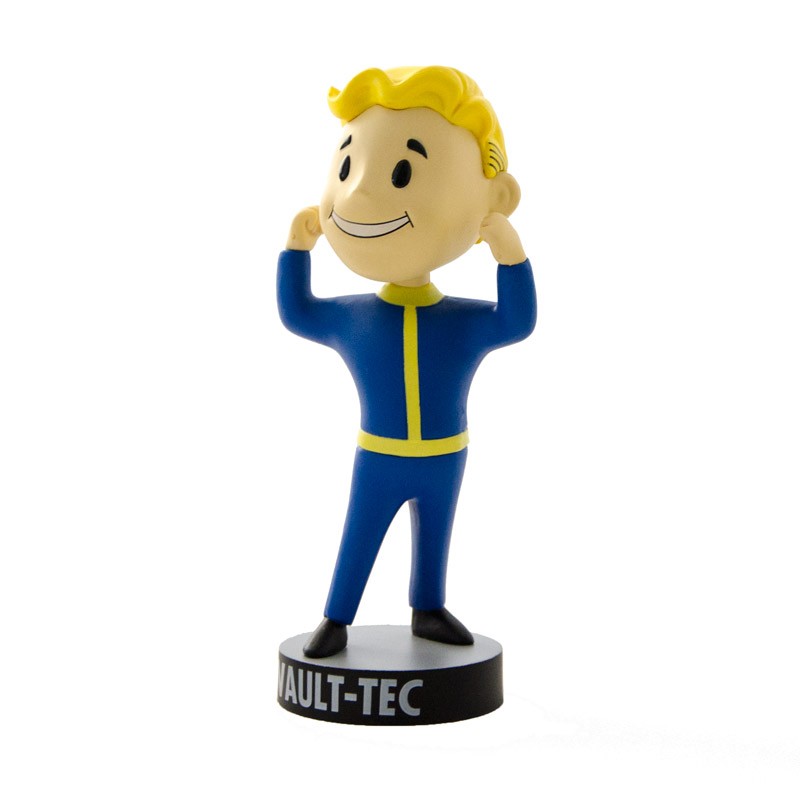 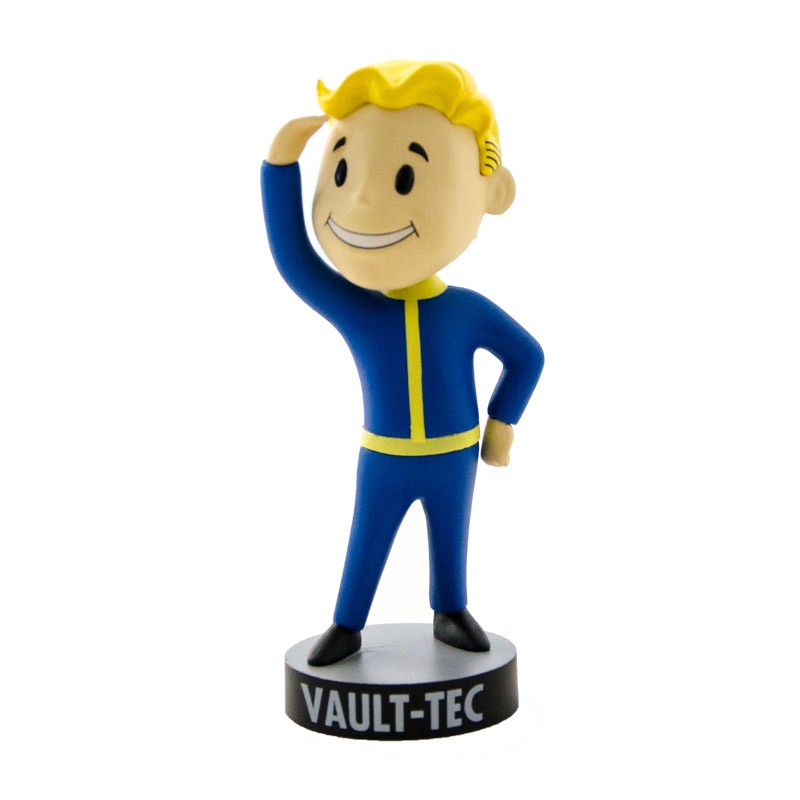 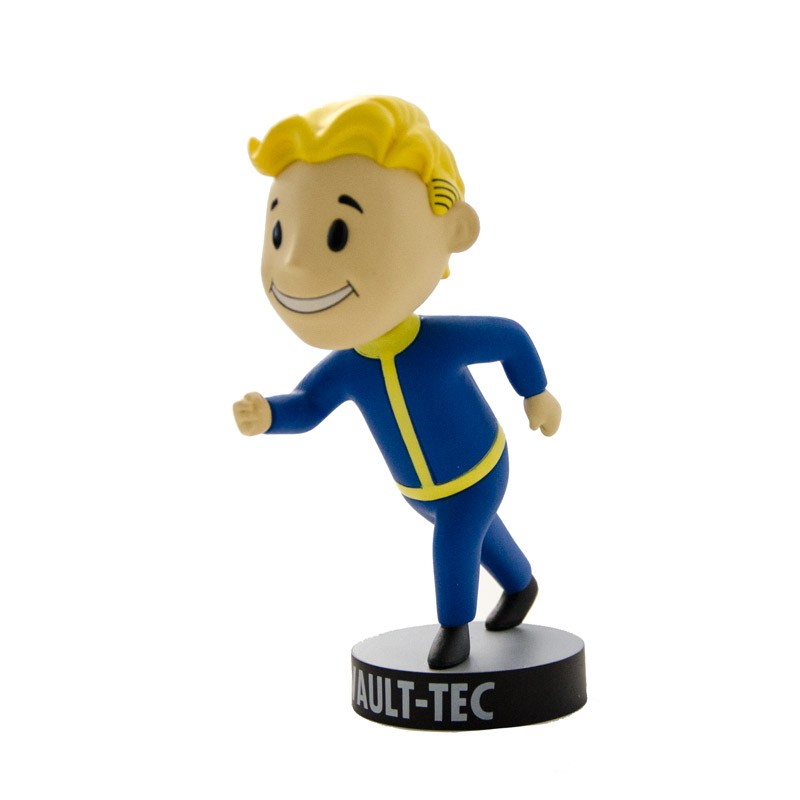 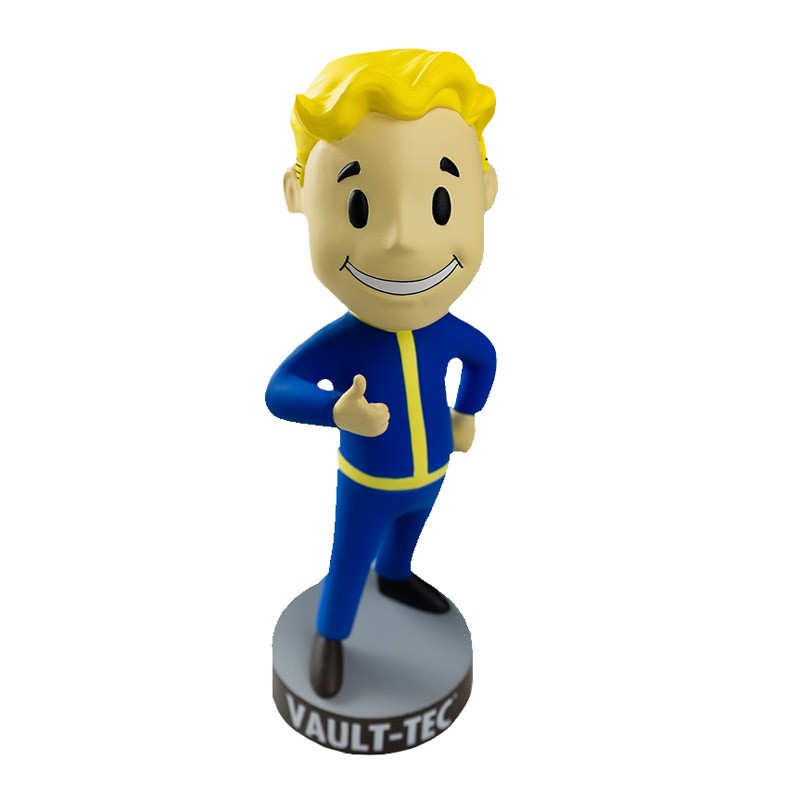 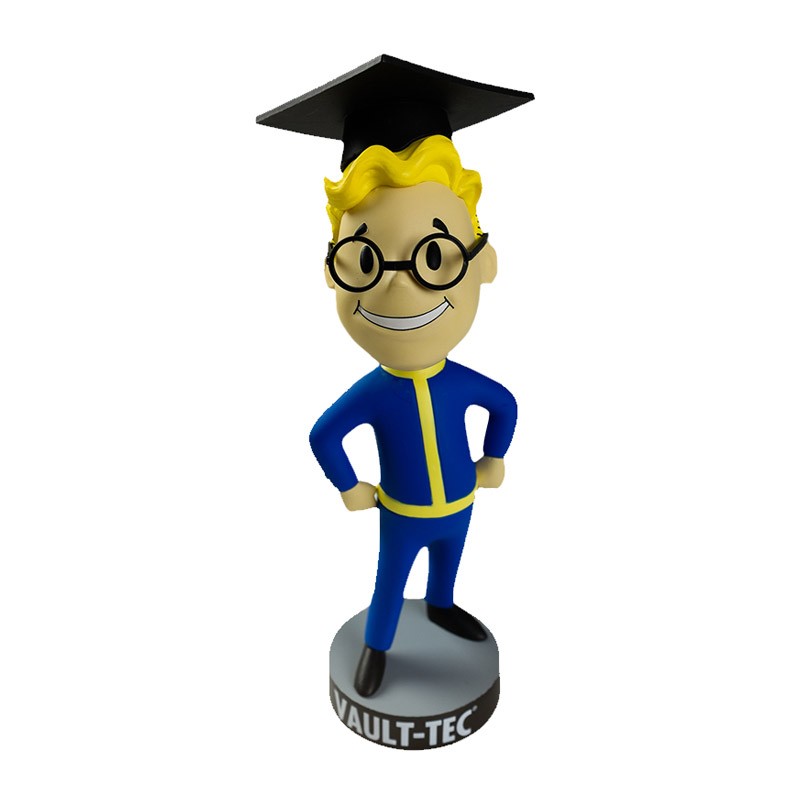 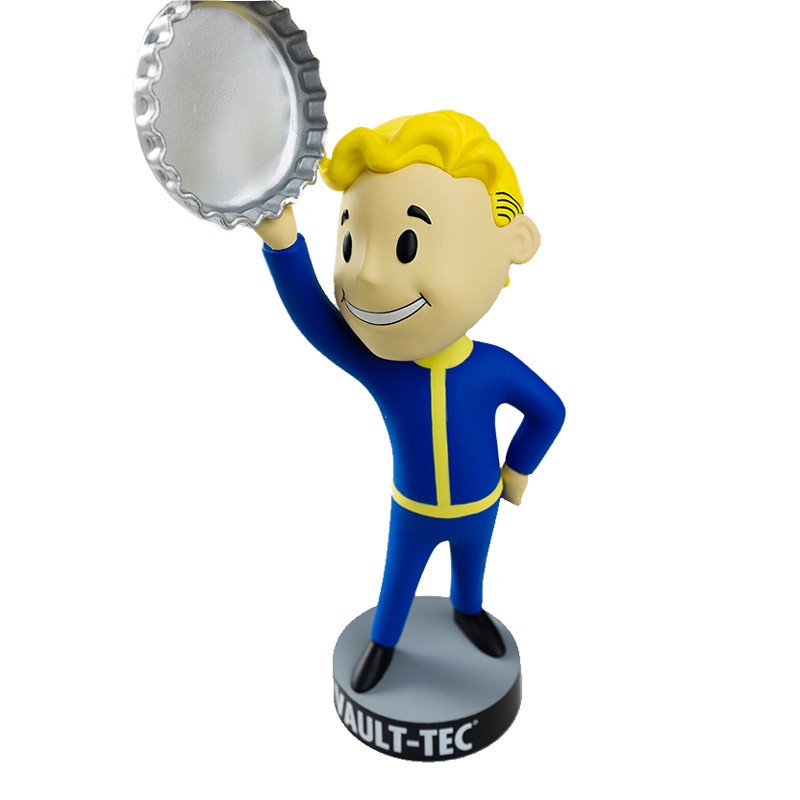 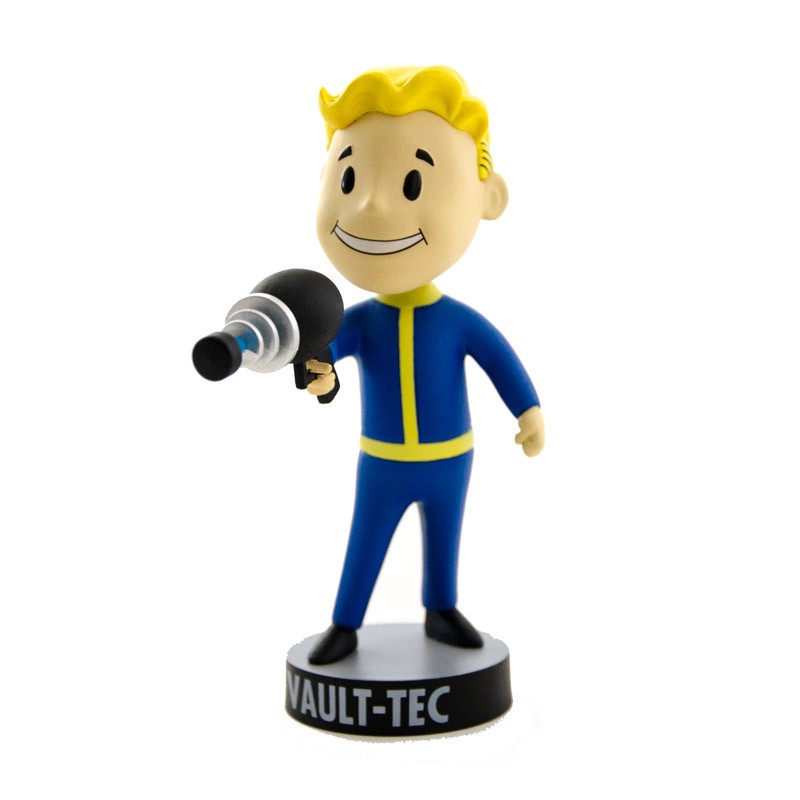 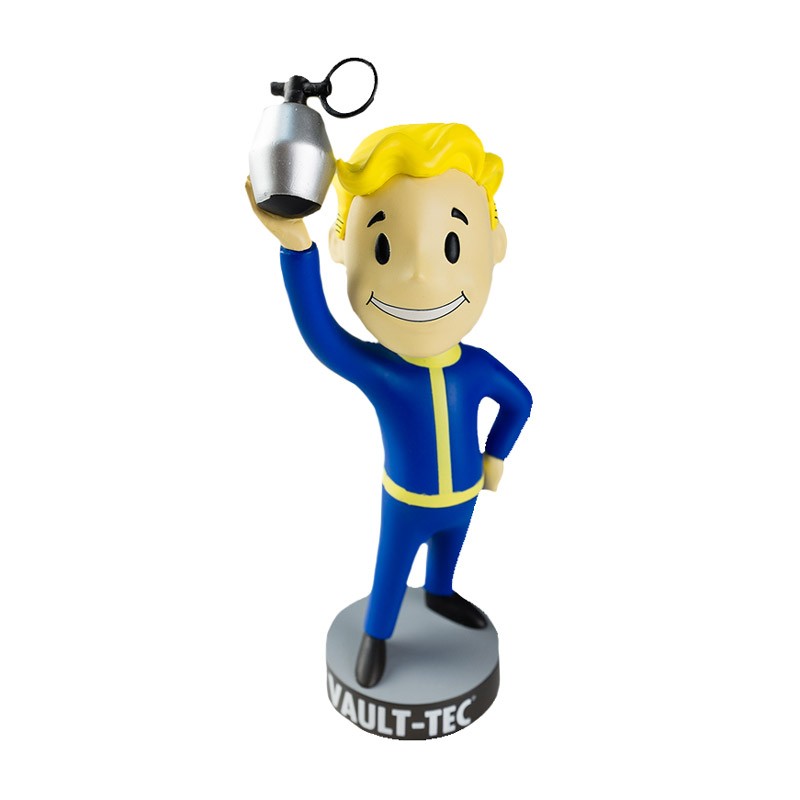 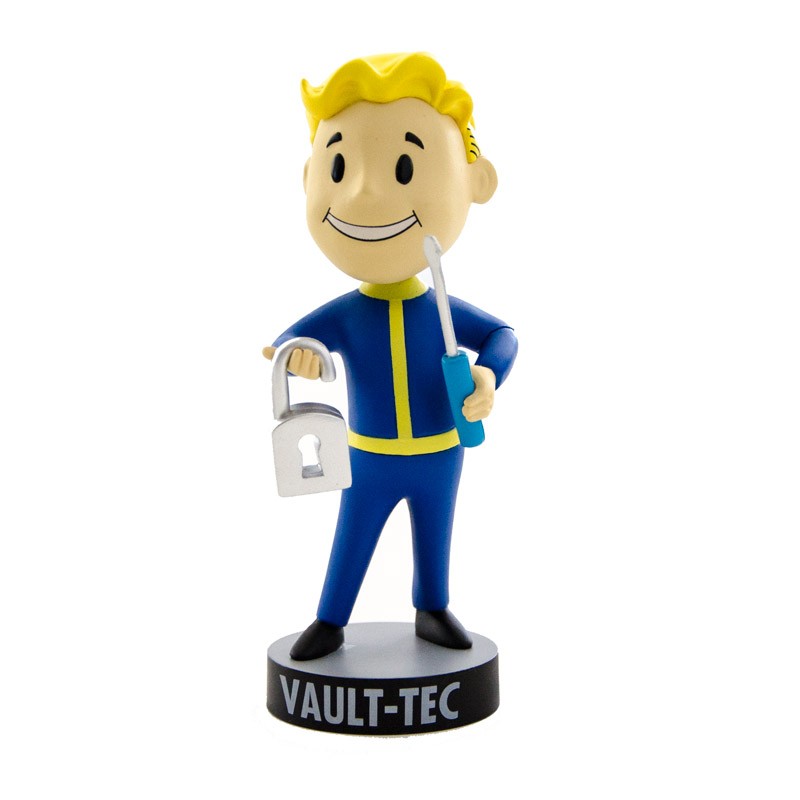 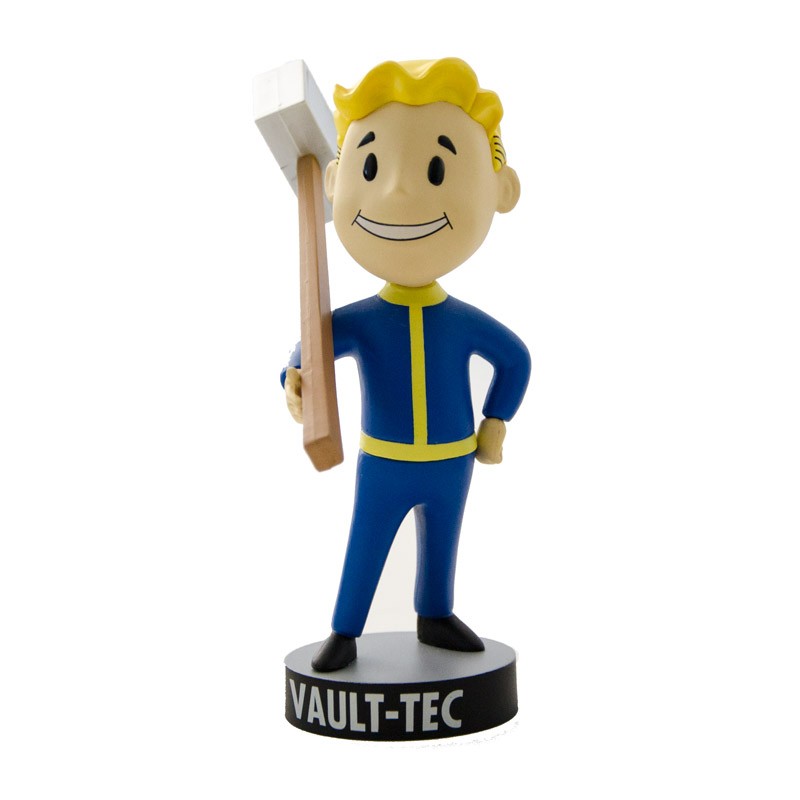 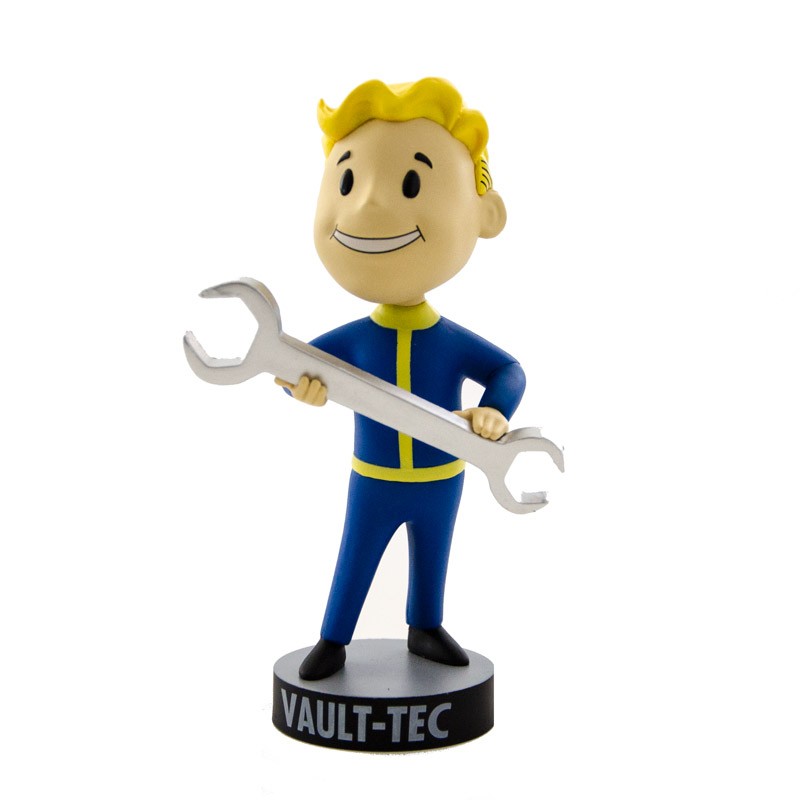 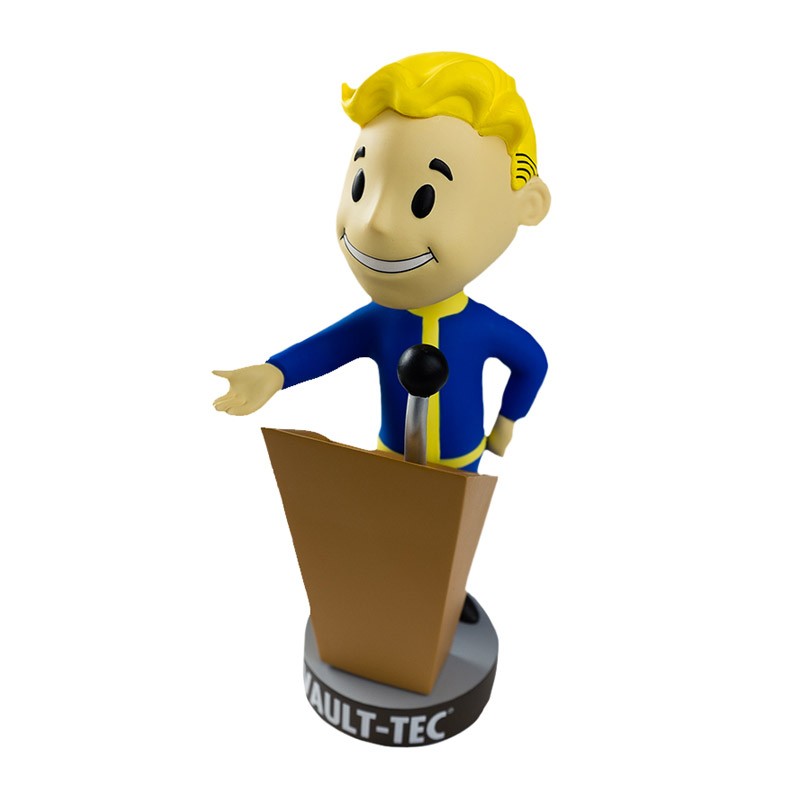 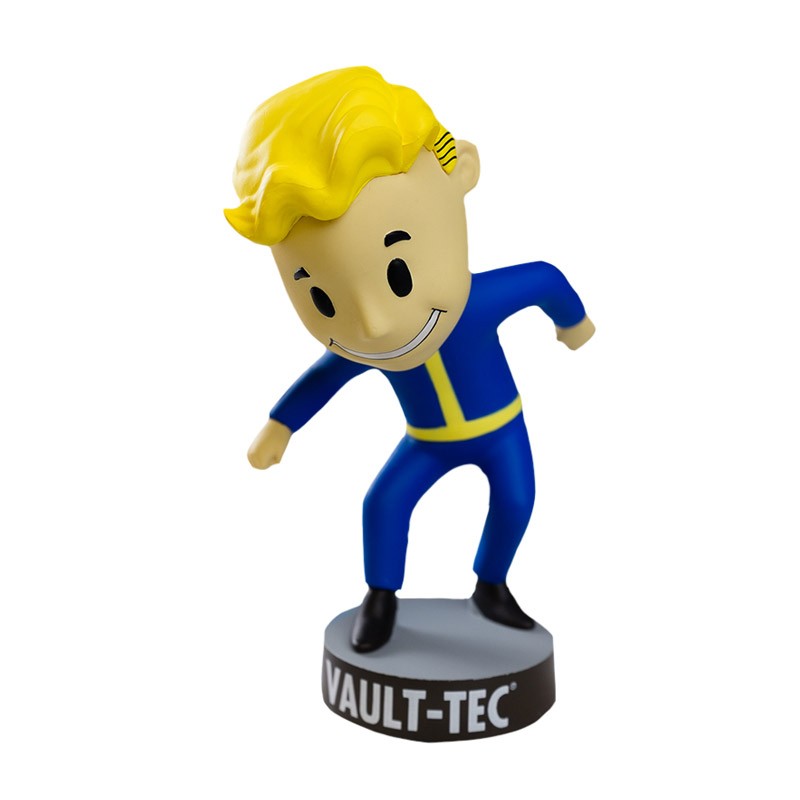 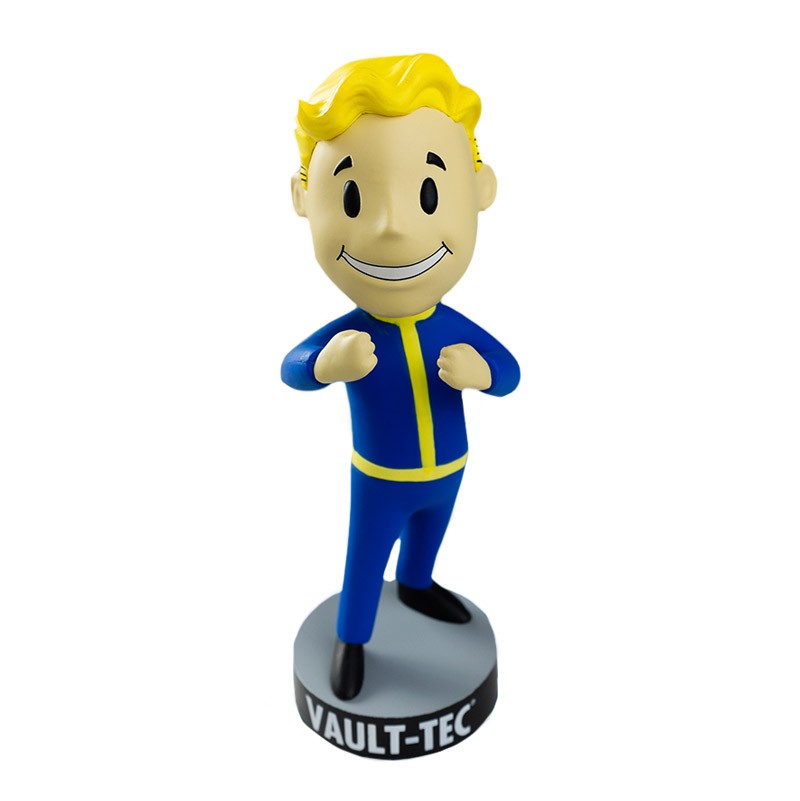 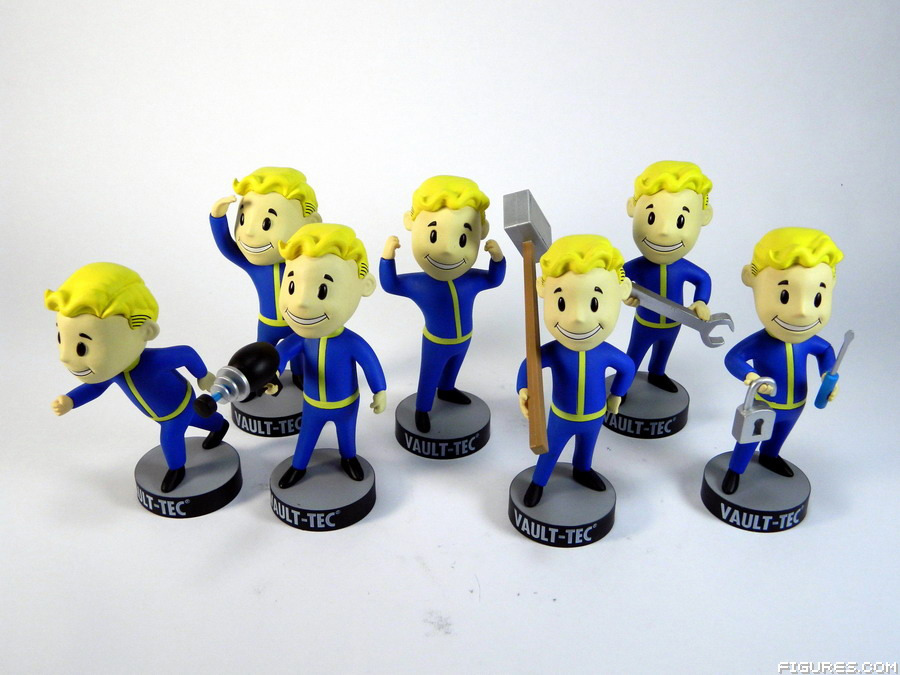 Multiple different versions of Vault-Tec bobbleheads have been produced:

The Brotherhood of Steel figurine given as a pre-order. This figurine was available in the UK and France. There is an alternate version (looks the same) given out with the special edition of the game in Europe.

The Vault-Tec lunchbox is available as part of the Collector's Edition of the game. It was also sent out to journalists and the like by Bethesda.

A bottle of Nuka-Cola sent out to journalists during the early days of Fallout 3 promotional activities, as well as given out at E3 2008.

Bottled by Avery's Beverages from New Britain, Connecticut. Bethesda commissioned them to re-bottle a sizeable amount of their standard cola as Nuka-Cola for distribution to the journalists and E3 patrons.

The following writing is found on the label:

The Fallout 3 themed water bottles were given out in Leipzig Germany at Gamescom 2008 (Video Games Convention).

The label has "Fallout 3 Purified Water" on it. These are made to mimic the in game purified water bottles which are one of the most important, and expensive, commodities in the post apocalyptic wasteland.

This clock is available with Amazon.com's Survival Edition of Fallout 3.

The Pip-Boy Deluxe Chronometer functions solely as a digital clock, with no alarm functions. It uses 3 AA batteries, which were included, placed in the top. The dial to the left of the display can be moved up and down a bit and the STATS, ITEMS and DATA buttons are used to set the time. The Geiger counter works as a compass on this item.

It can be worn on the wrist, but it does not fasten securely and will open easily. It comes with a stand for display.

There are numerous complaints on the internet about clock being rather poorly made, so it is probably better to not actually wear it and leave it as a decoration.

The Nuka-Cola bottle opener was given with pre-orders of Fallout 3 at Best Buy, including a limited supply for customers who bought the first lot after release.

A reference to the official Fallout Penny Arcade Comic, this puppet was given out at Penny Arcade Expo (PAX) 2008 in exchange for the Fat Man desktop card. Only 1500 of these puppets were made and some have sold for over $100 on eBay.

This set was avaiable only in Poland with Cenega.pl's Game of the Year edition. Inside the tin can was a blue "Fallout 3" t-shirt.

This T-shirt was available if you preordered the game at Walmart.com or Asda.com.

This T-shirt is often worn by members of the Fallout 3 development team. It was also sent out to journalists and the like by Bethesda.

A version of this T-shirt can be purchased for your avatar to wear on Xbox Live.

A CD featuring five songs from the soundtrack (three of them from Three Dog's broadcast at Galaxy News Radio) was made available to people who pre-ordered the game at GameStop. The track list is as follows 1)I Don't Want to Set the World on Fire By The Ink Spots 2)Way Back Home By Bob Crosby 3) Butcher Pete (Part 1) By Roy Brown 4) Main Title 5)"Fallout 3 Soundtrack-Megaton".

This version is the only hardcover version of the Fallout 3 Vault Dweller's Survival Guide measuring roughly 8" x 11", though it is not actually a "survival guide" like the others. There are roughly 20 pages containing concept art, information about the game along with screenshots, and press contact info for Bethesda. The rest of the pages are blank notebook pages for notes. This is essentially Fallout 3's Press Kit sent out to journalist by Bethesda and why the internals are general info and press contact information.

A booklet with the pocket edition of the Vault Dweller's Survival Guide. The guide contains all types of great survival information. It contains roughly 43 pages and is printed on old pulp style paper. A must for any new wasteland survivor.

This was given to Gamestop managers and customers that preordered the game online.

This sticker sheet was given out in limited quantities from those who pre-ordered their copy of Fallout 3 from Blockbuster in the United States.

This Vault-Tec mug was given as bonus with the Fallout 3 limited edition on PS3 in several countries in Asia.

Sent out to journalists by Bethesda. Also given as a pre-order bonus from Best Buy

Sent out to journalists by Bethesda, and given as a preorder bonus in Australia by JB Hi-Fi stores. Was also given with the PC version of the game in Norway when ordered from GameZone.no.

A higher quality version of this key chain was released on Amazon along side Fallout 4's release.

These Fallout themed Fisher-Price View-Masters were given out to attendees of E3 2008.