The Silo
The Courier
The End

After the New California Republic's successful attack on Navarro, the NCR started searching through the Enclave's technology. While not understanding the purpose of one device, they recognized the symbols on it from those in the Divide and hired the Courier to deliver the package there. The Courier delivered it and left, after which the mysterious device started transmitting codes to the launch computers in the Divide, signaling them to detonate the nukes in their silos. The Divide was torn apart by earthquakes and storms and the device shattered. Afterwards, the computers of the Divide collected the fragments of the device, along with other scrap, and used them to make the frame of this version of ED-E.[2]

At first glance the Courier mistakes the robot for ED-E, who plays music from the TV show "Ralphie". With an Intelligence of 6, the Courier deciphers the beeps and garble and realizes that the silo has "pretty advanced engineering capabilities", since it was able to remote-scan ED-E from the Mojave Wasteland and create copies within the Divide. If one does not pass this check, the Courier will still observe this, asking ED-E "So, you're like a robot clone?"

Upon joining the Courier's party, ED-E starts playing a log from Dr. Whitley, and continues doing so at certain "checkpoints" during their trip through the Divide. Ulysses will also use ED-E to communicate to you throughout the Divide. ED-E will also show through certain dialogue choices that it misses Dr. Whitley and that it wants to be like Ralphie.

Unlike its Mojave counterpart, this version of ED-E has much more emotion and has developed feelings.

This copy of ED-E appears only in the Fallout: New Vegas add-on Lonesome Road. 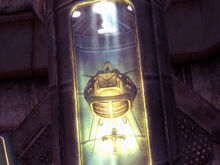 ED-E in an endings slide