Find Collar 8: "Dog"
Fires in the Sky
Put the Beast Down

“Don't like this place. Want to go back, back to the base. Or the Church, miss the Church.”

Dog is a psychologically disturbed nightkin who helps Father Elijah by capturing "assistants" for him and fitting them with explosive collars in 2281. His alternate personality, God (referred to by the former as simply "the voice"), is trying to break Dog free of Elijah's grasp.

Hand-picked by the Master to serve in his super mutant army, Dog's job was to fetch new humans to be turned into super mutants. Dog was crushed by the Master's defeat, and he eventually found his way to the Sierra Madre, where Elijah took advantage of his need for a "master" figure in order to enslave him. Elijah utilized his previous purpose, using him as a tool for bringing in potential treasure hunters and later for activating the Sierra Madre Gala Event. Dog is extremely loyal and will follow the commands issued by his master's voice to the letter, even when it puts him in danger. He also has a tendency to eat anything, even ghost people, when hungry. This eventually led to him accidentally eating his own explosive collar when it came off after the first Gala Event occurred trapping Elijah and, as his other personality mentions, keeping him a prisoner to his hunger and to Elijah. Like most nightkin, Dog exhibits severe mental trauma from prolonged Stealth Boy use, resulting in dissociative identity disorder. He hates the voice, and is willing to do anything to be rid of it, even going to the point of self-harm. Pain hurts him, but also quiets the voice, so he will go to extremes such as scarring his body and putting his arm in a bear trap in order to make it stop.

The voice – "God" – is very different from Dog. He is quiet, articulate, controlling, and far less pliable than his counterpart. However, he does threaten a very painful death when the Courier mentions having the power to put him back in "the cage". He claims that he only wishes to help Dog, even confessing a protective brotherly affection for him and believes the best way to do that is to eliminate Elijah - only then can he help Dog overcome his hunger and need for a master. He does not care for the treasure of the Sierra Madre, and frequently comments on the Courier's perceived greed. When in combat, he is far less adept than Dog, as he is less accustomed to using the nightkin body and lacks the bloodlust of his other personality.

Much like Lily Bowen, Dog and God are limited in the weapons they can use. These weapons are:

Since Dog/God cannot equip any weapons unique to Dead Money and outside weapons cannot be brought into the Sierra Madre, Dog/God are effectively restricted to Unarmed fighting, frag grenades and the sledgehammer.

Dog and God appear only in the Fallout: New Vegas add-on, Dead Money. 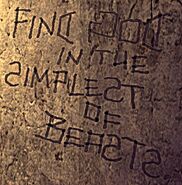