Dogs are animals commonly found in the Capital Wasteland.

Though 200 years have passed since the Great War, dogs have stayed generally unaltered by radiation. Dogs are a favored pet for traveling merchants as they provide both companionship and protection. As a result of the radiation, most dogs have lost their fur and have slightly mottled skin, but some have retained their fur coats and appear completely normal.

Dogs are quadrupedal canines that can run at incredible speeds, allowing them to chase down prey. While running, they use their long tails to keep their balance. They are carnivorous and have sharp teeth designed to rip into flesh.

Dogs are usually encountered in packs of four to six. To low level characters, this could mean trouble since a pack can easily overwhelm and surround them. To higher level characters, they are little more than a nuisance, yet can still be difficult to put down as a result of their erratic and quick running patterns. Vicious dogs (and their variants) are always hostile unless the Lone Wanderer possesses the Animal Friend perk.

Raider guard dogs fight alongside their masters, the raiders. Since they are trained as guard dogs, they are very attentive and can spot threats easier than many other creatures. Raider guard dogs will tend to run at targets they find hostile, alerting the raiders of their presence. They are still affected by the Animal Friend perk, but will not attack raiders.

These dogs are found around scavenger's encampments and will be friendly to others as long as they do not act aggressively to them or their master. These dogs have slightly less Hit Points and attack damage than vicious dogs.

Scavengers' dogs will take back items that the thief steals from their master, even if their master is dead.

Identical to vicious dogs below, these animals will often accompany Talon Company mercenaries. Much like the raider guard dogs, their Perception is high, and they may spot hostiles faster than the mercs do. They are also affected by the Animal Friend perk, much like their other canine raider brethren, but not attack Talon Company mercs.

Ruthless survivors of the wastes, these irradiated dogs will always be hostile, unless the traveler has acquired the Animal Friend perk. They are almost always encountered in packs of two to five, usually in open areas. These dogs are dangerous as they can sometimes spawn in semi-random areas. Vicious dogs will often encircle targets in an attempt to stop them from escaping.

Used as guards by the Chinese soldiers in the Anchorage Reclamation simulation, these dogs, being simulations, are not affected by the Animal Friend perk, unlike their other canine brethren. Guard dogs are only worth a single point of XP. Just like scavengers' dogs, they share their model with Dogmeat, with the same breed and the same type of heterochromia, while being significantly weaker. Once killed, like all characters in the simulation, they disappear from the game. 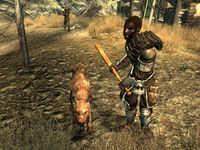 Raider and his guard dog attacking at Kaelyn's Bed & Breakfast 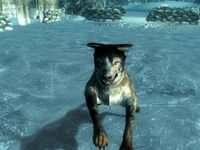 Guard dog at the ice camp in the Anchorage Reclamation simulation 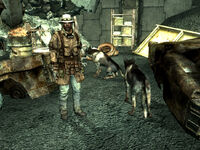 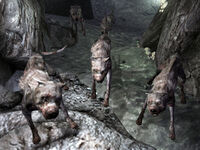 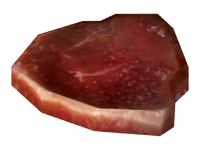