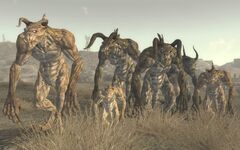 Line-up of all deathclaw variants

Deathclaws are creatures living in the Mojave Wasteland in 2281.

Deathclaws really live up to their name in Fallout: New Vegas. The game introduces several new variations of the creature, and they are found in much larger numbers. However, unlike in Fallout 3, deathclaws are never encountered randomly, and always appear in specific locations. Most deathclaw variants are armored, making them more resilient against attacks. Their Damage Threshold is 15, equal to that of a suit of combat armor.

There is also a deathclaw-filled cave by the name of "Dead Wind Cavern." Here one can find the unique legendary deathclaw, the most powerful creature in the Mojave Wasteland, along with other variants of generic deathclaws. Another location with a high number of these creatures is Gypsum train yard. Depending on the Courier's level they will either be regular, young, or blind.

A standard deathclaw with most of the attributes mentioned above.

Matriarchs of the deathclaw broods and mates to Alpha Males, Deathclaw Mothers are second only to the legendary deathclaw in ferocious might and can run faster than the Alpha Males, though they do slightly less damage and have slightly less health. Deathclaw mothers are taller and heavier-built than regular deathclaws, with greenish-blue skin, a thick dewlap, long backwards-sweeping horns, short back-spikes, and a long tail ending in six sharp spines similar to a Stegosaurus. They lay their eggs in dark, secluded holes, and protect them fiercely. If anything attacks or even kills one of their babies, Deathclaw Mothers will go into a blind rage, killing everything in sight that isn't a deathclaw.

They can be found at Quarry Junction, deathclaw promontory, and Dead Wind Cavern.

Deathclaw babies are the youngest and smallest of the deathclaw species. They can be found throughout the Mojave Wasteland. While they are no real threat by themselves, they are always found following a deathclaw mother. If one of them is killed in the mother's presence, she will be driven into a frenzy. If their deathclaw mother is killed, they will simply stay near her corpse.

These immature deathclaws are about the size of a human. Their horns are not fully grown and their skin is much lighter than grown deathclaws. This makes them easy to pick out among regular deathclaws. Although normally easy to kill for higher level players, they tend to cluster near the adults.

The blind deathclaws have a higher Perception than regular deathclaws, with the rest of their heightened senses more than making up for lack of sight. However, their attacks are weaker. Even though they cannot see, their alertness to the presence of threats will in fact alert all other deathclaws nearby of their target's position, despite the one that found them being blind.

This type of deathclaw can be encountered at the Gypsum train yard as well as Primm Pass and Bonnie Springs.

One of the most dangerous creatures in the Mojave Wasteland, the legendary deathclaw is found in Dead Wind Cavern and has distinctively long horns, a light olive coloration, and striped tails. It is also one of the largest enemies in the game (along with the X-42 giant robo-scorpion and the giant ant queen), towering over other deathclaws (themselves roughly 10 feet) with its massive 15–17 foot stature. The legendary deathclaw also deals enormous damage (twice as much as ordinary deathclaws), and can bring down even the hardiest player character in only two or three hits depending on the difficulty , all while having the third largest amount of Hit Points in the game, behind the X-42 giant robo-scorpion and the legendary bloatfly. Despite its size, the legendary deathclaw can move faster than its normal counterparts and has been known to make successful leaping attacks from great distances.

Deathclaws found in The Divide level with the Courier, increasing in power at levels 30, 40, and 50. At higher levels, they are noticeably more powerful than deathclaws from the Mojave Wasteland, with higher health and a much more damaging melee attack, surpassing even the legendary deathclaw in damage (but not in health), when at maximum level.

Deathclaws appear in Fallout: New Vegas, its add-on Lonesome Road and one in Old World Blues.

Deathclaw mother and her babies attacking 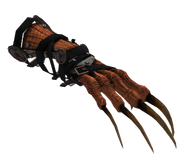 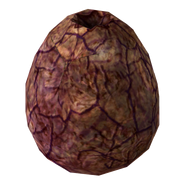 Concept art from The Art of Fallout 3.