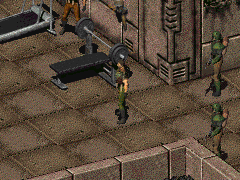 Get the map from the NCR Rangers, for Vortis the slaver

Darion is the leader of the New Khans raider gang in 2241.

An older man with thin, gray hair, Darion is in good shape for his age. What keeps him going are two things: Hate and fear. The former is directed on President Tandi of the New California Republic, whom he blames for all the miseries in his life and then some. The latter is paranoia derived from survivor's guilt, that one day the Vault Dweller would return to kill him.[2]

Darion is the son of Garl[1] and was originally a part of his father's war band, a Khan through and through. When Garl made the mistake of kidnapping Tandi in 2162, Aradesh asked the Dweller to save his daughter. The Khans never knew what hit them and the war band was wiped out, breaking the Khans in New California. Darion hid during the fighting, the only reason he survived. This trauma was the foundation of all his future life.[2]

For eighty years, he plotted his revenge and rebuilt his gang. By 2241, he became strong enough to occupy Vault 15 right under the Republic's nose, putting up a smoke screen in the form of the Squat under Zeke. He even managed to plant a spy right in the Congress Hall of the NCR. However, years of living under stress and paranoia had taken its toll. Although fit for a veritable ancient (nearing one hundred years, much like Tandi), Darion is a mental wreck. He has an enslaved doctor tending to him, trying to prolong his life enough to see revenge.[2]

The Chosen One denied him that luxury. Striking at Vault 15, he wiped out the Neo Khans and Darion, securing the Republic's expansion northwards.[3]

Darion appears only in Fallout 2.