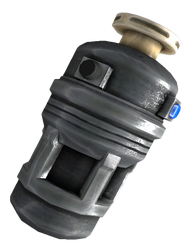 The cryo grenade is a thrown explosive that was added to Fallout 3 in the Mothership Zeta add-on.

The cryo grenade deals only one point of damage to targets, but will freeze them solid for three seconds. It can be used to get a few easy shots on foes, or to freeze a non-player character in order to pickpocket them. Reverse pickpocketing a cryo grenade or a cryo mines into a character's inventory will also freeze them.

These grenades can be obtained from Elliott Tercorien after releasing him from stasis and going through the cryo lab with him. He will pick up some cryogenic parts in the area where Beckett and Daniels are frozen which enables him to start making the grenades upon return to the engineering core. He will give you 3 cryo grenades and 3 cryo mines after you wait an hour for him to make them. After that you must wait another 3 hours for him to make 2 more each time you ask. Elliot will not be able to make any more cryo grenades or cryo mines after he leaves the engineering core during the quest This Galaxy Ain't Big Enough....

The cryo grenade was originally a weapon cut from the final version of Fallout 3. It does not exist in the final version of the game, nor does it exist as an unused item in the G.E.C.K. editor. The mesh and texture are contained within Fallout 3's BSA files, but these files were not used, as new meshes and textures were made to replace them in Mothership Zeta. Another cryo weapon, the cryolator, exists only as a mesh and textures in Fallout 3's BSA files.

If you are caught in the blast and paralyzed, the frost effect will not appear unless you are in your vault undergarments. [已验证]