“You need a home base out there. The Construction and Assembly Mobile Platform is designed to give you one.”— Vault 76 overseer, Overseer's log - C.A.M.P.

The Construction and Assembly Mobile Platform (C.A.M.P.) is an advanced campsite creation device issued to the Dwellers of Vault 76 in Fallout 76.

The Construction and Assembly Mobile Platform is a mobile device created by the Vault-Tec Corporation. Future-Tec had some sort of involvement in the C.A.M.P.'s design, having produced a model of C.A.M.P. described as the "latest in advanced C.A.M.P. technology."[1] Whether this is referring to the standard C.A.M.P. being a Future-Tec creation, or that Future-Tec made its own improvements to the existing C.A.M.P. is unknown. While many were used by the inhabitants of Vault 76, they later were utilized by wastelanders returning to Appalachia, to the point one individual made a series of holotape instructions to educate individuals how to use them.[2] They were also for sale at certain locations.[3]

The C.A.M.P. consists of a small olive drab chassis that, when deployed, sprouts metal supports and various workshop-related tools. Intended to be portable, it quickly folds into a toolbox-like form complete with sturdy handles. The rear post extends upward into a miniature drill press while a vice clamp swings out from the side. The top of the toolbox-like portion of the chassis folds out into two sections to reveal a small circular saw. On the top shelf that is beside the vice clamp is a shelf with a whetstone located towards the front, while the opposite shelf has a lathe.

The side of the chassis reads "C.A.M.P." in golden lettering, with "Construction & Assembly Mobile Platform" written underneath. The model number is also present, written as "Vault-Tec Mo. No. 76SE." A notice is written beneath the model, stating: "WARNING: Do not use before passing Vault-Tec 'Serving Survivors' (Course Plan No. 243)."

Once placed, the player character will have a personal workshop area centered around the C.A.M.P. It can be moved to a different location by redeploying and paying 5-50 caps depending on how far the player character is from their camp and how recently they last moved it. If the player character's campsite becomes damaged, all repairs can be automatically made by selecting the "Repair All" interaction option at the C.A.M.P., but only if they have the scrap necessary to meet the requirements for the repairs.

The C.A.M.P. is acquired by the player character in Vault 76 on the way out into Appalachia during the first quest, "Reclamation Day". There is a pile of C.A.M.P.s behind the stand, but none of these can be taken. Another C.A.M.P. can be found at the overseer's camp, where the overseer has left hers for the vault residents to use the cooking station and weapon and armor workbenches. Player characters can also find C.A.M.P.s placed by other characters on the same server. Ones marked as vendors will be better identified on the map if they are not part of a player's team.

The player character can place their C.A.M.P. outside anywhere that is not near existing structures nor in a restricted area. The immediate area around Vault 76 and the Whitespring Golf Club are examples of restricted areas. Player characters are able to place their C.A.M.P. adjacent to their teammates' to connect them and construct larger workshop areas.

On the small chance of a player character's C.A.M.P. having been in the same location of another character's currently placed C.A.M.P. while joining a server, their C.A.M.P. will not be placed but the campsite will be stored as a single blueprinted object for easy placement elsewhere. However, due to current game limitations, it is frequently impossible to place an existing blueprint if any differences in terrain exist. The player character will have the option of either placing down their C.A.M.P. for free elsewhere or joining another server where their location is unoccupied and their C.A.M.P. will spawn there automatically.

Following the release of the Wastelanders update, player characters are disallowed from building in specific areas due to presence of buildings owned by human NPCs. Any player character with a C.A.M.P. already in such areas before the update are evicted, but these C.A.M.P.s can be transferred to another location once for free. 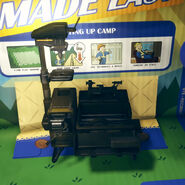 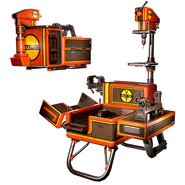