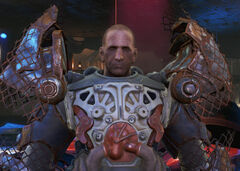 Colter without his helmet

Overboss Colter is the leader of the raiders in Nuka-World before the Sole Survivor arrives in 2287.

Colter is the leader or "overboss" of the three raider groups in Nuka-World in 2287. Porter Gage selected and guided Colter to lead the three factions to the theme park due to him being the toughest raider around. However, after taking control of the park, Colter became lazy and did not live up to his responsibilities as originally planned. The other raiders grew tired of Colter's rule and began to plot against him to have him replaced as overboss.

Overboss Colter spends his time killing victims in the rigged final stage of the Gauntlet, where he uses his custom electrically-powered overboss power armor to easily murder those who reach the arena. When the Sole Survivor arrives at the final stage, Gage and the other raider bosses launch their plan to kill Colter using the Thirst Zapper.