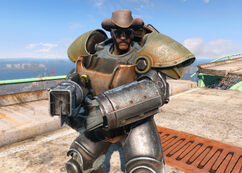 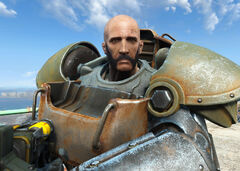 Clint without hat and glasses

Lieutenant Clint is an officer of the Gunners, a mercenary faction operating in the Commonwealth in 2287.

Formerly a ten-year veteran of the Commonwealth Minutemen under Colonel Hollis, Clint became a Minuteman in the year 2277, and he at some point during his career came under the command of Colonel Hollis. Lieutenant Clint is later one of the local Gunner leaders at Quincy ruins. In return for leaving and betraying the Minutemen in what became the Quincy Massacre, he was given the rank of lieutenant with the Gunners. A handful of settlers and Minutemen led by Preston Garvey managed to escape so he sent a detachment of Gunners in pursuit. He ordered Ezra Hollis to be captured alive and he killed him personally to gain his new troops trust.

Clint leads the Gunners stationed at Quincy, alongside Baker and Tessa. His weapon of choice is his custom automatic AER9 laser rifle, Good Intentions. He believes that the Minutemen no longer have the strength to survive, even when the Sole Survivor becomes general and starts restoring the faction to their former glory.