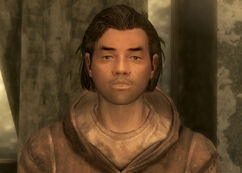 Clayton Etienne is a storekeeper in the Westside Co-op shop in Westside.

Living in Nevada all his life, Etienne was born in New Reno, but headed down to Westside as soon as he could. It was a good decision, as it was even worse in New Reno than in Westside, as the entirety of New Reno had become overrun by crime families. The fighting between the Mordinos and the Wrights died down with the Wrights winning out. However, when the Van Graffs came to New Reno, searching to expand their sales empire, they butted heads with the Wrights. Turning into a pile of goo wasn't Etienne's dream, so not long after the arrival of the Van Graffs, Etienne left.

He started the co-op only a few years ago, with the eventual help from Tom Anderson. It is almost what single-handedly keeps Westside independent. With help from the Followers of the Apocalypse, the workers at the co-op can finally start making a profit. However, Etienne's achievement has seemed to go un-thanked, but he is just happy to be out of New Reno. That was, of course, until the Van Graffs showed up in Freeside.