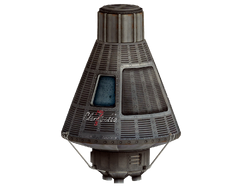 Clarabella 7 was the United States Space Administration space capsule flown by Colonel Hartigan, USAF. Like its ill-fated pilot, the capsule is still aboard Mothership Zeta in its research lab.

The capsule is visually identical to the Project Mercury capsules, including a hatch and window for the pilot and a retro-rocket unit attached to the heat shield with steel straps. However, real world Mercury capsules were painted black while the Clarabella 7 was painted grey. Additionally, the capsule is missing its conical top radio section, which in a real Mercury flight would have been jettisoned following the de-orbit phase after the retro-rocket unit had jettisoned.

the capsule in the research lab